The great Rebellion Tour has come to an end, yet again. We went to Essen to see our friends in Devil In Me, and sat down with guitarist Pedro Matos. Read all about their new video ‘The End,’ their experiences on the Rebellion Tour, and playing in multiple bands at the same time.

What did you expected from the Rebellion Tour this year, and how did it go?

The tour is coming to an end and tomorrow we’ll play the last show in Paris. Maybe it was the best tour for Devil In Me so far, because almost every show has been totally sold out! We actually expected that it would be a big tour, but we didn’t know it would be that big! It has been really awesome for us!

We get along pretty well with the bands, especially with Deez Nuts and H2O.What more can I say about the Rebellion Tour?! It was great seeing the reactions at the venues with a lot of kids who already starting to know DIM, and singing our songs with us! And that’s the most important thing!

Your new music video for ‘The End’ became very popular just in a few days. You directed the video and it was your first experience, correct? How did the idea come about?

The idea came up about a year ago. We were on last years Rebellion Tour, and we decided to record a video for that song. We’ve been on tour with a lot of bands and then I thought that it would be great if we’ll make video with a bunch of the people singing our song. During those times we started recording that, and luckily we had really good camera with us. So we filmed Born From Pain, Trapped Under Ice, Madball, Wisdom in Chains, and that’s how it started. Later that year I went to New York to the Superbowl HC Festival and continued my work there. The result was that now you can see Agnostic Front and Sick of it All in the video as well! Everywhere we went we had the camera with us! So we asked bands, who’ve been playing with us to join and everybody was enthusiastic and absolutely into it!

We had over 65.000 views a short amount of time! People shared the video, and the bands helped us a lot too. So we really appreciate that! We are like a small, humble band from Portugal and having all of those bands, singing our song is a big honor for us and we’re proud of that! And about my own experience – I really like to film things, and I’ll go on with doing that for sure!

The members of Devil In Me had multiple musical projects going on. Last month Cascavel released ‘TUDO OU NADA’; is it hard to be in a few bands at once?

Yeah, obviously it’s pretty hard! And we’re giving a lot of attention to Devil In Me and Sam Alone. For example, me and Poli (Apolinário Correia) are playing in three or four different bands now just because we can’t stop writing music and it’s easy for us to record things! When we started with DIM, we had this bouncy sound and now we’re going to a slightly different direction. We want to bring in some 90’s influences, but in our individual, special way. The same goes for Cascavel (eng. – rattlesnake). We have a lot of friends which are playing with us so that’s how all of those projects started! The drummer of Cascavel is Rafael Madeira from Avocado Booking, who ran the previous tour with Wisdom In Chains. All our bands have different directions, and help us to express ourselves!

You’ve been on tour here before with Wisdom in Chains. What do you remember the most from those days?

Oh! That was a great tour, and we became very close friends! We’re calling and texting each other every day, checking in how things are going. I’m looking forward for the day when we’ll see them again and can be on the road!

You can see different genres of music these days, but Wisdom In Chains is a true hardcore band, you know? It’s real HC! There were a lot of nice moments, which we shared together while touring! Hanging out with them was pretty great! And maybe we’ll do some work together in the near future. But they’re just plans now, so you’ll hear about that when we’re sure!

Can you highlight special features of venues you’ve played at the past years? Do you have favorite venue?

It’s hard to remember every venue where we’ve played! And I can’t say that some was better, and some were worse. We appreciate that kids coming to our shows! And that means a lot for us, wherever we are, you know! Probably for myself I like Berlin and Paris… But sometimes it’s hard for me to remember where we played few days ago! So, we’re glad to be anywhere, where people are waiting for us! 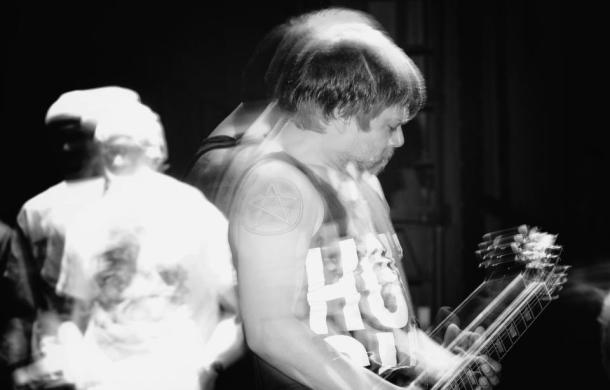 What inspires you? Any bands that stand out as an example for you?

Maybe it’ll sound like a cliché, but we love all kinds of music! And the thing is that we share the same taste within Devil In Me. So I can come to the guys and say, for example, that I’ve been listening to the song of Kanye West and they will check it out and like it as well! Obviously, there are a lot of hardcore bands that inspire us: A Wilhelm Scream, Strike Anywhere, Madball, Agnostic Front, Sick of it All, Hatebreed, etc.

A lot of bands trying to make something what kids would like. We also do, but we’re trying to bring something new to the table – different chords, different singing, and different harmony!

What are your future plans?

When we’re back home, we’ll start planning to film a new video for Devil In Me, so it’s gonna be released soon! Keep updated via our Facebook! And we want to try to tour countries like Japan, Indonesia, Australia, and the United States. We just want to be on the road and touring as much as we can. It’s sometimes hard, because we all have jobs and families, but we want to spend more time together! And while the video and record is out now, we want to take full advantage of it!

Words and photos by © Dasha Veselovskaya

One thought on “Interview: Devil In Me”