Atlanta, Georgia’s resident adventurous metalers, Becoming The Archetype, are gearing up for the release of Celestial Completion, available in stores and online March 29th. On Monday, the band will unveil ‘Magnetic Sky’, the first new track from the forthcoming album. But fans don’t have to wait until then to get their first glimpse – today, the band is giving the metal world a tease by unveiling the cover art for Celestial Completion through http://www.metalinjection.net. 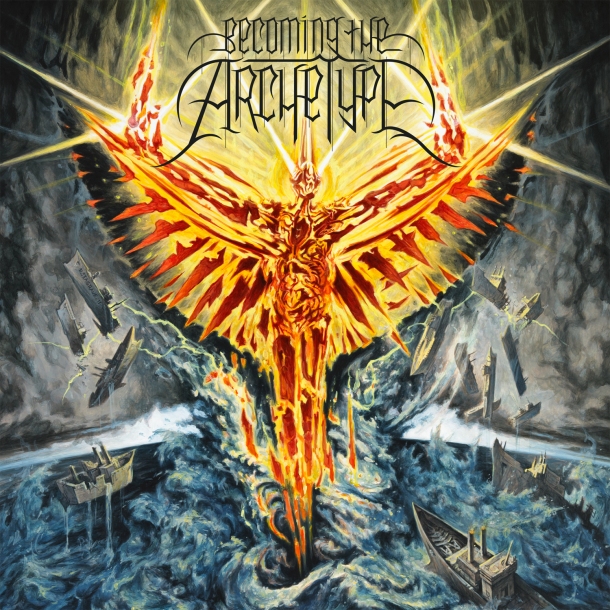 Solid State art director Ryan Clark had this to say regarding the cover: “For Celestial Completion we called upon the incredibly talented Dan Seagrave, who had also created the artwork for Becoming The Archetype’s debut album, Terminate Damnation. For us, this was a bit of a ‘return to the roots.’ Dan never ceases to amaze with every piece that he creates, and unlike most fine artists, is friendly, easy to work with, accepting of direction, and best of all, on time.”

Celestial Completion is a wildly ferocious, relentlessly creative and breathtakingly risky album that will redefine Becoming The Archetype for fans, skeptics and critics alike. Like the band members themselves, the album is uncompromisingly metal, yet unafraid to show a sense of playfulness as it pushes the limits of heavy music to the very breaking point. There are horns. There is Middle Eastern sitar. There is a choir of sopranos. Needless to say, paint-by-numbers metal this is not. But one bone-crushingly heavy, imaginative tour de force it certainly is.

Speaking of the band’s sense of musical adventure, guitarist/keyboardist/vocalist “Count” Seth Hecox says, “Everyone should know that we have championed a great juxtaposition between heavy music and world music on Celestial Completion. Complete with BTA-patent keyboards, epic riffs and Jason Wisdom’s incredible lead vocals, all the elements of great music are firing on all cylinders.”