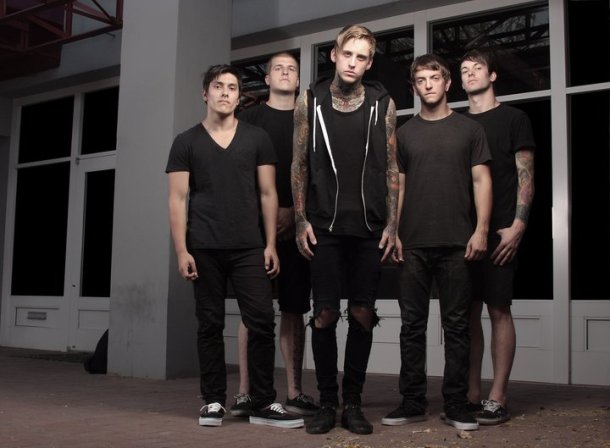 For The Fallen Dreams has announced the departure of drummer (and band co-founder) Andrew Tkaczyk, who has amicably left the band. Tkaczyk had the following to say:

“After starting this band with Jim almost 8 years ago in 2003, I can say that my life since then, has been nothing short of amazing. I have had experiences and seen things that a lot of people will never get the chance to, and I’m very greatful. I’ve been lucky enough to travel to places like Australia, UK, Europe, Mexico, Canada, and our own beautiful country dozens of times, to play shows and live my dream. Recently I hit a point in my life/music career where I had to make a decision that was not easy to make. I realized that it was the right move for me to step down from FTFD. This in NO way whatsoever has anything to do with any of the guys in this band. It was a personal choice that had been building up inside me for months, and it only felt right to go the path that I’ve chosen. Jim, Dylan, Kalan, Jaime, and anyone else who has been in this band and shared these times with me, I thank you. You all have played huge and important roles in my life. I’ll never forget the times we shared.

“I wish the guys in FTFD the BEST of luck as they are recording their 3rd full length record as we speak. I guarantee all of you that this happening will not affect or slow down this band at all. They’re going to make an amazing record for you guys. All of these guys are still some of my best friends and this doesn’t change that. With that being said I’d like to make it clear that this also is not the end for me in music. I will be pursuing other projects in time, and I will still be writing music and releasing material on my own. I will also be writing for some other bands as well. Once again I’d like to thank everyone in FTFD, Ryan “Dog” Nelson, Craig @ Rise Records, Pantheon Agency, and anyone else who has helped FTFD grow over the years. I love you all more than words can describe!”

Meanwhile, guitarist Jim Hocking had the following to say:

“When Andrew came to me about his concerns I was completely floored. I wasn’t sure if I wanted to continue the band we started, without him. To be honest, For the Fallen Dreams was on thin ice. There was a period when we thought this band was done, with everyone headed separate ways. It was hard to accept but giving up just didn’t feel right. After weeks of soul-searching, and speaking with friends and loved ones, I spoke with the remaining members of the band and we decided to stick to it and write an album about all of the obstacles we overcame during the last record cycle.

“There is absolutely no bad blood between Andrew and the members of this band. He’s a talented musician with a future ahead of him, we wish him the best. We are currently in talks with a few amazing drummers to fill the spot full-time, but haven’t made any decisions yet. If anyone is interested in trying out, we are open to any video submissions (hocking.jamesm@gmail.com)

“Moving on, we are two weeks in at Diamond Studios in Ocala, FL with Tom Denney until March recording our third full-length album. It is expected to be released in the spring-time so keep your eyes open for new songs! Our friend Will Weatherly from Ocala is taking on drum duties in the studio. He’s an experienced studio musician and is bringing a lot to the table for the record. Fans and supporters, DON’T WORRY!!! We have a lot of great tours coming up, on top of our most exciting record to date. 2011 is already shaping up to be a great year, as well as a new era for the band! Stay tuned.” (via Lambgoat.com)

One thought on “For The Fallen Dreams Drummer Quits”