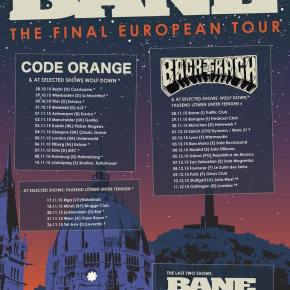 The almighty Bane from Worcester, Massachusetts have announced their final run of European shows. The tour will take place this fall and will kick off on October 28th. Code Orange and Wolf Down will be joining Bane on the first leg of the tour and Backtrack will take over on the second leg. Get your … END_OF_DOCUMENT_TOKEN_TO_BE_REPLACED

I love The Chariot. They were one of the first heavy bands I started listening to when I was younger – this was just after they had put out their debut album Everything Is Alive, Everything Is Breathing, Nothing Is Dead, and Nothing Is Bleeding. To me, The Chariot breaths what heavy music is about: … END_OF_DOCUMENT_TOKEN_TO_BE_REPLACED

Videographer Micah Bearden joined The Chariot on a leg of their farewell tour in Fall 2013 and shot some amazing footage which was compiled in this beautiful and emotional “Forever Farewell” video. This video portrays everything I love about hardcore. It’s with great admiration that I say farewell to The Chariot. I bought ‘The Unsung EP’ at age 15 … END_OF_DOCUMENT_TOKEN_TO_BE_REPLACED

Atlanta, Georgia was the home of one of the most influential, heavy and chaotic bands of our time: The Chariot. The band was formed in 2003, shortly after singer Josh Scogin left the same position in Norma Jean. In 2004 the band released their debut album Everything Is Alive, Everything Is Breathing, Nothing Is Dead, And … END_OF_DOCUMENT_TOKEN_TO_BE_REPLACED