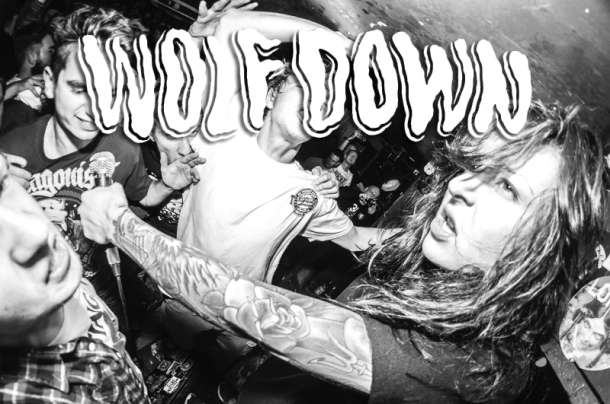 About five years ago, I got in touch with a guy from South Africa named Pete Reynolds. Just like me, he was running a webzine and he had just published his first fanzine. Some time has passed and I’m glad to call Pete and his wife Cara good friends now. He just put out the second issue of RISE and this is a preview of the 9-page (!) in-depth interview he did with Tobi from Wolf Down. Support creativity and order RISE #2.

Where did the name ‘Wolf Down’ come from?

Our band name is a reference to the logic of modern society, with all the negative impacts it has on our planet. To “wolf down” means to devour something very hastily. We’re living in an age of abundance, disposability and blind consumerism and it’s becoming clearer than ever that our way of living is far from reaching the proclaimed “sustainability”. Care to remember what happened with that huge oil spill? Everybody forgot about it and we go on just like before. The catastrophe of Fukushima is probably not as present as it should be anymore either. In general, the topic of earth exploitation and destruction can be found in our lyrics and is a central matter of our band.

What do each of you do outside the band? Are any of you involved with any organizations or anything?

The others are trying to make ends meet by doing smaller jobs. I, for my part, am still a student. You could say that our lives are revolving around the band though. We all need to sacrifice a substantial part of our daily life to keep the band thing going. To me, it’s still a big honor to be able to tour other countries with some great people by my side, make new friends and see a thriving scene all over the world. I’ll never take that for granted. When you come home from tour, which I just did (we toured Asia for the last weeks), it’s always kind of a letdown to fall back into your habitual environment with all these new experiences in the back of your head and it just makes you wanna leave as soon as possible (D.E.A.D.R.A.M.O.N.E.S.). So I guess I just try to bridge the time best possible, while trying not to turn into a complete dropout, until we leave for the next tour. For the others it’s no different I suppose. I myself like to read a lot of books, eat good vegan food, spend time in nature, hang out with friends and catch up with local politics. As far as organizations are concerned, some of us are involved in local political groups, but no formal ones or anything…