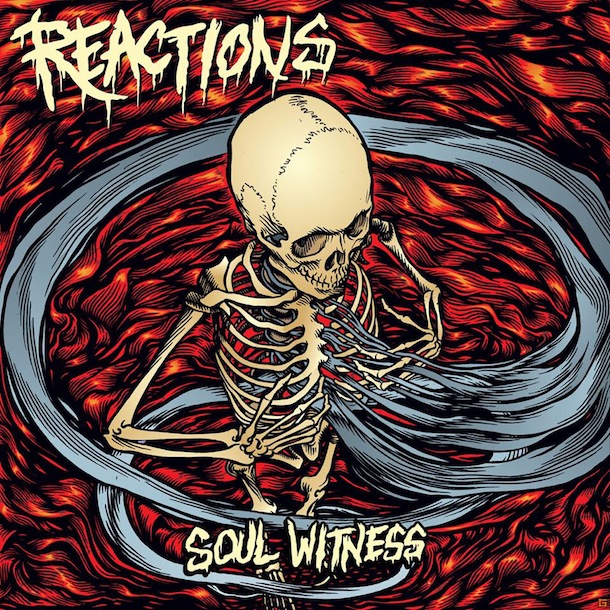 New kids on the block Reactions are making their mark with eleven tracks of pure Aussie, hardcore venom. Shane Edwards of Karma Studios has stepped into the engineer’s shoes, while the mighty Dogfight Records are to thank for unleashing this gritty little record on the unsuspecting public. With this behind it, Soul Witness ticks all the boxes a half decent hardcore album should, but is it enough to stand out amongst an overcrowded scene? Hell yes.

‘Death Creep’ sets a barbaric tone, peddling out some metallic guitar riffs, a medley of angst vocals and a tight rhythm section, this song does exactly what it says on the tin. ‘Bound by Blood’ and ‘Guilt Trip’ rain in some destructive guitar licks accompanied by Lachy Picher’s relentlessly callous vocals. We’re treated to more of the same as Soul Witness cascades through a host of towering breakdowns, battering drum beats and lashings of Terror-like riffs.

Reactions offer a short-lived breather from the groove riddled rage in the form of ‘Forced to See’, making for a spectral instrumental it features some tight rhythmic pieces topped off with another healthy dose of malicious beatdowns, courtesy of ‘Damned to be’. As this savage record comes to a close we get a true appreciation for its rich, heavy mix, Edwards has outdone himself here. ‘Wicked Ways’ and ‘The Soul Witness’ keep the ferocity burning, brimming with groove and metallic heaviness it sounds akin to Backtrack’s finest work. The final blitz comes in the form of ‘Forsaken’, driving the album to a peak with one final ass-kicking breakdown.

Soul Witness is hardly ground-breaking, but it’s far from stale. It supplies enough classic hardcore traits while retaining an undeniable sense of dynamism and originality. If bands like Backtrack and Rotting Out have taught us anything it’s that you don’t have to redefine a genre to sound straight-up awesome. Do yourself a favour, pick up a copy of Soul Witness, turn up the volume and get ready to head bang until your neck breaks.