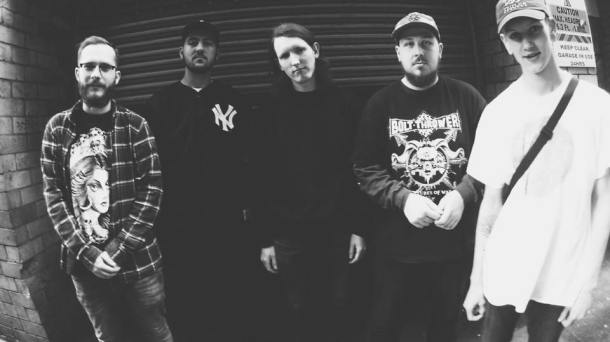 Mercy are a new band from Stirling, UK that you need to know about. Mixing hardcore with grunge and sick melodies, these guys put all their creativity into their work. With a first demo under their belt, they’ll be playing the Northcote all-dayer in Dordrecht, The Netherlands on December 6th. Read on to learn a little more about these guys.

“My name’s Alastair Brims and I play bass in Mercy.”

How did you come up with the band name, Mercy?

“Atmosphere, energy & interesting. Don’t get me wrong when I say ‘interesting’, I’m by no means trying to big up my own band – It’s interesting for me. Half the time I feel like I’m just being dragged along by these boys and I’m lucky to be part of something I find so creative. Of course it’s still a team effort, that’s how we sculpted the sound we have. There’s no ringleader in this band – its 5 different brains all contributing, but not suffocating one another’s ideas. I love the combination of grunge and hardcore yet still trying to make those goosebump moments with melody. I like to think we’ll really work and define our sound over the course of the next release. For me, it’s all about the energy and atmosphere – I think the others would agree for the most part. Whether we have it or not from an outsider perspective, I don’t know. But there’s nothing I care about more in hardcore than those two factors. You can always tell by watching a band if they believe in their music or not from the energy they give. If they don’t seem into it, what reason do I have to be?”

You’ve released your first 4-track demo in August this year called Volume 1. What’s the story behind this release?

“Well, I remember Andy was talking about it and he mentioned he was doing a band with Duncan and Paul (we went a few practices without a vocalist) and I immediately wanted to get my foot in the door. I’d actually only bought a bass about a month prior to Mercy so I essentially learned at practice. The beauty of hardcore – any idiot can buy a bass off Amazon and join in. We kept real quiet about it. It was nothing more than friends jamming. Which was an exciting prospect for me. Usually when you form a band you have an idea and a layout but we just went mad with melodies and shit and tried not to restrict ourselves to any sound, etc but always focused on ultimately keeping it a hardcore band. Once we had four songs we were happy with, we recorded, played a local show, released the demo and now we go from here I guess!”

Mercy are playing Northcote in December. What are you’re expectations for this all-dayer?

“I love the Netherlands and met some sick people there so I’m buzzed about going back. As far as the fest itself goes, we’re all stoked to be part of it. I can tell its gonna be a wild day. I remember seeing the line up last year and planning to fly out for it but not being able to get the time off work – so it’s a good feeling to be asked to play it the following year!”

Finally, what’s line up for Mercy in the near future?

“The next record is on its way, we got some tours to announce still and a few other events, fests, etc. We’re lucky to have quite a busy schedule ahead of us! I can’t wait to see where 2016 takes things. Thanks for a chance to speak, and listen to Revulsion! I’m looking forward to seeing you all in December.”