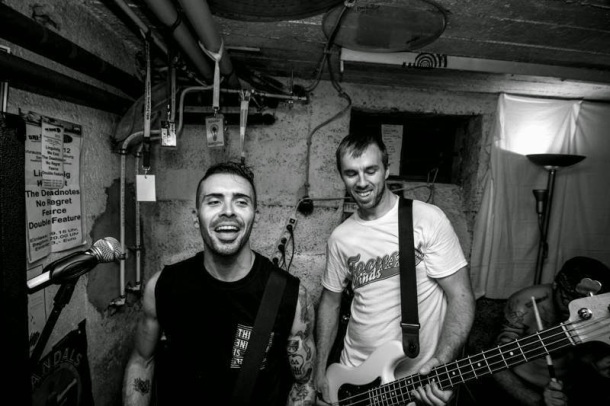 On September 19th, 2014, Boston band Test of Time announced their ending and transited with former members into its new form: Spirits. In their six months of existence, Spirits has already delivered three EPs and are about to release their debut full-length Discontent via State of Mind Records and Reality Records. With a European tour coming up in May, I caught up with guitarist Charles Chaussinand to introduce his “new” band.

“My name is Charles and I play guitar in Spirits. We have Mike on vocals, Robert on bass and Kevin on drums.”

How did you come up with the band name, Spirits?

“It was a name I had been sitting on for a while, actually. The whole way I thought of it was just because I used to love these “Shorty’s” skateboard shirt that had a “S” printed on each sleeve. I wanted to make shirts that had that and I had to think of a simple, short word that had a “S” at each end. When we were thinking of band names, I threw the idea out there and it took a while to stick with everyone, but it ended up being a good fit.”

“Fast, melodic, catchy. We are all fans of the late 90’s Epitaph-era punk bands and they really have a lot of influence on us in terms of trying to write songs that are fast and aggressive, but still catchy and with melody. The band is just a collection of all the different musical styles that we all like. We love Go It Alone, Battery, Pennywise, etc and really just try and add things from those, and other types, of bands that we think will make a song interesting or fun to listen to. We write a lot based on what we would want to see live. Great bands put together a set list that really has everything they want to convey to the audience over their set. Great sets slow down, speed up, have sing alongs and we try and write songs that make us get that same feeling.”

In your six months of being a band, you’ve already released three records. How did happen so fast?! Did you guys already have songs shelved and waiting for the right moment to put them out?

“We had maybe four or five songs that were from past bands we had done and were just sitting ‘on the shelf’, so we revisited those and made changes to fit this band. Almost everything, for the most part, was written together for these releases. A lot of the EP was written as we were recording the drums in our practice space. We would have been playing a part of one of the songs that we didn’t really like and we would all just sit with it for a minute and just play out what we were hearing in our heads and, suddenly, the song was sounding better for us. The LP, Discontent, had a lot of conversations that included something along the lines of “A song with this kind of feel would be cool to add to the record” and one of us would play a song from another album that we like and we would kind of get the sense of that song and write something that is our own, but we thought gave the same mood when listening to it. Usually, those songs were nothing like what we had started listening to, but it would just somehow remind us of what we were going for and it stuck.”

Can you tell us more about the artwork for Discontent?

“The art for Discontent is pretty unique, we think. It is a 7.5″ wide by 25″ long strip of paper with the black and white portrait of a girl on it. When that is slid off of the record, it reveals the same face behind it but with no skin. It is all just the muscle of the head and in full color. That jacket portion, instead of the typical opening on the side, is diagonally cut so that you have to pull either the top or bottom apart. From there, you see a skull that fits perfectly below each of the other faces on a printed inner sleeve. It is the idea of going through someone’s head and getting what is being thought about. The art was all drawn by a friend of mine, Hannah Medeiros.”

Finally, what are you most looking forward to about touring Europe?

“Our drummer, Kevin, hasn’t been to Europe before and he is really excited just to be there. It is fun that we can take a trip like this that allows us to do something we love in a place that isn’t very familiar to us. We have made some great friends in Europe in past visits with old bands, so it is always great to bridge the continental gap and get to spend some time with those friends. We are playing MyFest in Berlin on May 1 and we have been told that is pretty wild based on the number of people that just pour into the city. I am pretty excited to see that. If we’re playing in a city near you, come see us and say hi!”

Spirits are touring Europe from April 30th till May 23rd. Check all dates here, make it out to a show near you and hit that “Going” button. 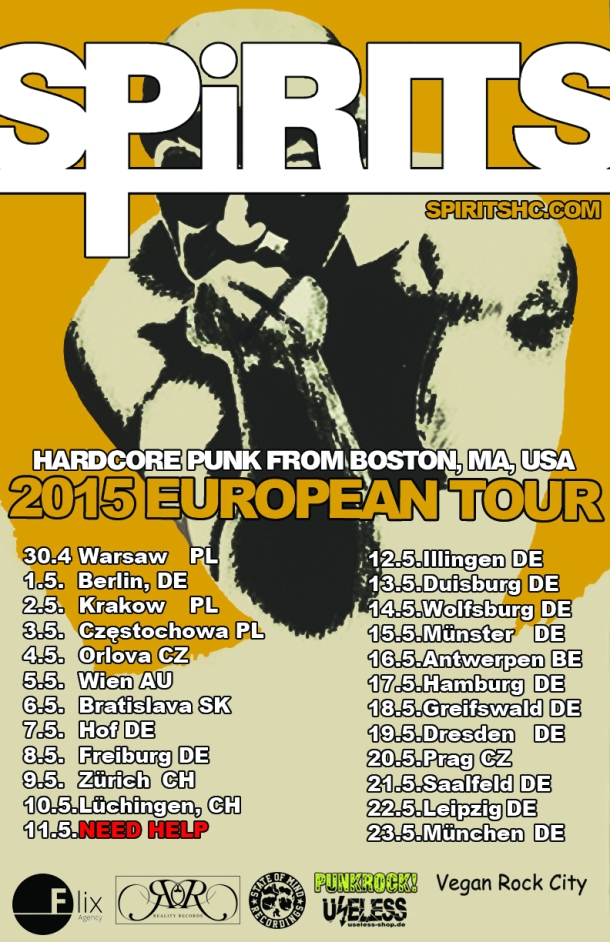 One thought on “Introducing: Spirits”