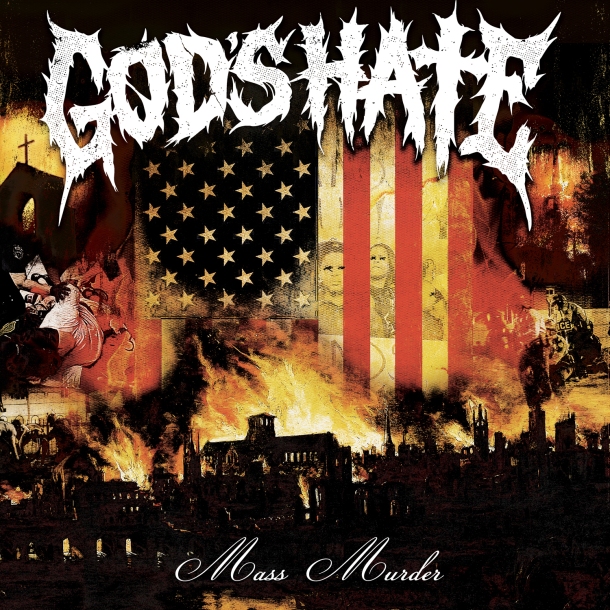 The cover of God’s Hate‘s debut album (as seen above) is a collage that consists of images of police brutality, eyeless people, burning churches and a American flag in flames. Lyrically, but also in some ways musically, this is the perfect representation of this band: on fire, political and violent. God’s Hate could be considered a ‘supergroup’ of some sorts. 3/5th of the band also plays in Twitching Tongues (TT) while drummer Leopoldo Orozco (ex-TT) plays in Disgrace (which is pretty much a TT side project). If that is not enough, this album is recorded by Taylor Young (of, indeed, Twitching Tongues) in his The Pit studio. The only newcomer is vocalist Nate Blauvelt, which you can hear doing gang vocals on the latest Terror and Backtrack releases.

God’s Hate play a form of metalcore that reminds of legends like Merauder, the Holy Terror Hardcore-sound and the slower parts of early Hatebreed. After releasing EP’s in 2014 and 2015 Mass Murder is their proper full-length and shows a logical growth for the band. While keeping some of the elements of the more beatdown-focussed, gang shout drenched Divine Injustice EP, this record is much more ‘metal’. Opener ‘Extermination’ and title track ‘Mass Murder’ have some seriously catchy melodic leads and songs like ‘Violent Procreation’ and ‘Righteous Fear’ feature blistering solo’s.

While I’m not completely fond of the vocals on this album, Nate’s lyrics can be heard clearly and his voice works quite good together with the backing screams of Colin Young. This is especially the case on ‘Father Inferoir’, ‘Unsound Fury’ and ‘Witness Rejection’ which all have great double vocal attacks. The record is filled with chilling movie samples taken from Game of Thrones, True Detective and Blade Runner that deal with religion and living in fear.

As I said earlier, Mass Murder is a leap forward for God’s Hate. The band delivered their most diverse record to date and used beatdown like a device rather than centering their songs around it. Closer ‘Benevolent Submission’ is by far the best track of the album, showing that God’s Hate can also pull off slow-burning, less agressive songs. Hopefully these guys will tour Europe sooner than later so we can check them out on stage too!

You can stream Mass Murder below and buy it HERE and HERE!