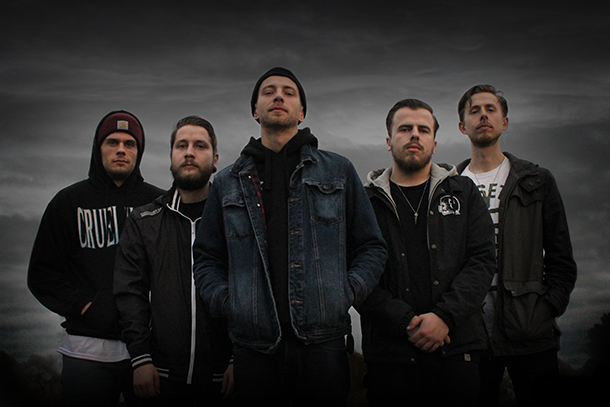 Hesperian is a band from Utrecht, the Netherlands that’s been around since 2013. They’ve left their mark in the European scene with their melodic blend of hardcore in vein of Carpathian, Verse and bands alike. They recently went through a rigorous line-up change, so I spoke with original band member and guitarist Robert Rozendaal. On December 6th, they’ll be playing their first show with the new line-up.

“Hi! I’m Robert Rozendaal, and I play guitars for the band Hesperian! Hesperian is a band that has been very actively playing shows across Holland, Belgium and Germany for 2 years now. We have released two EPs (one of them through White Russian Records) and those have been received with great enthusiasm!”

How did you come up with the band name, Hesperian?

“Well, for starters I am a HUGE Deftones fan. When I was about 13 years old I got my hands on the selftitled album. And on the track ‘When Girls Telephone Boys’ Chino screams something about a “Hesperian Deathhorse” somewhere, with such aggression and passion so that really impressed me. Those words just got stuck in my head throughout many years, and I decided to name my band Hesperian.”

“Passion. Heart. Agression. This band is not about appearing cool or following the latest trends in hardcore, metal or anything like that. I think we’re just angry kids that need to vent their frustration through something positive, like being in a band and making music that speaks to us and trying to meet as many new people as possible. Because for me, thats why I started doing music in the first place.”

Hesperian recently went through some vigorous line-up changes. In what way did this effect the band and its sound? I understand you had just recorded an album but won’t be putting it out?

“Yep, Hesperian now consists of Zeph on vocals (actually our very first singer), Clint and Dimitrie from the band Better Off from Limburg (go check them out! Now!) on bass and guitars, and last but surely not least my old classmate Lennard Post (who I’ve been in Price To Pay with 2007-2010) helping us out on drums for all our shows.

To me, the sound has changed for the better, actually… Tighter, angrier, more fed up… Maybe it’s because I’ve known all of these guys for years and things just clicked personally and musically. I also think the change has been for the better because I know all of these guys have been around the block a lot and know how to “be in a band”, next to the fact that we just enjoy being in each others company and we listen to the same kind of music.

About the album. We had recorded a decent but to me very depressing, slow and introvert record. Which I loved, but only objectively. I really couldn’t picture myself getting behind it 100% playing it live. I do know that Leonard, our ex-singer, is releasing those songs by himself or with a new band! And I wish him all the best in the world with that, it were mostly his songs anyway. I think that a new formation and a band that has the same mindset as him would do those songs justice.”

What are your ambitions for Hesperian with the new line-up?

“Playing shows and having fun mostly! These past few months have brought a lot of phone calls, recording, e-mails, miscommunications and heated conversations up until the point where our new line-up entered the rehearsal room. I am very relieved that there is a nice, relaxed, open and positive atmosphere in the band now, and I would love to see it used for energetic shows and making new friends across Europe!”

Finally, what lies in the near future for Hesperian?

“Shows! We have some Dutch shows, we are hitting Germany a little bit and we’re constantly writing songs and throwing ideas at each others heads. I think you could expect something new from us beginning 2016! In the meanwhile, we’ll be driving to shows all over the place! Check it out, and hopefully we’ll see as many of you as possible at one of our shows!”