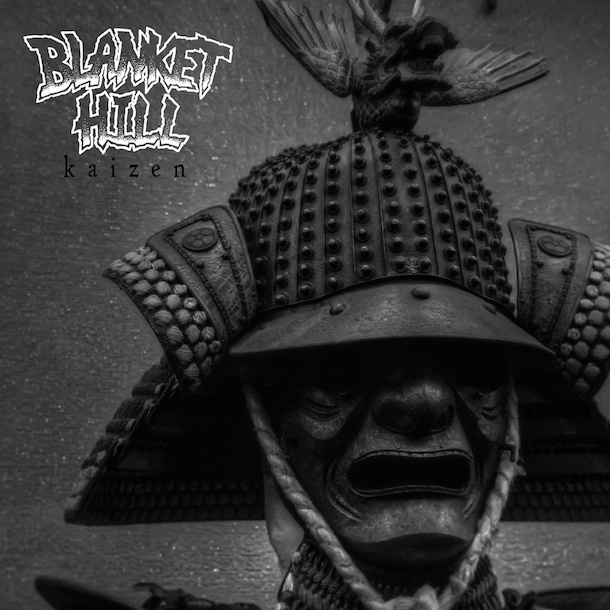 LBHC! For those of you who didn’t know, Luxembourg hardcore quintet Blanket Hill released their first EP called Kaizen a couple of weeks ago. The EP contains six tracks filled with straight up, groovy and heavy-as-fuck hardcore. Kaizen starts off with a quote from the show The Sopranos: “We’re in a situation where everybody involved knows the stakes and if you’re gonna accept those stakes, you gotta do certain things. It’s business. We’re soldiers.” This quote immediately sets the vibe of the record. Straight to the point and portraying a bleak and no bullshit view of the world.

First track ‘Jersey Swamps’ kicks in with a mid-tempo hardcore riff reminiscing of Harms Way and Cold World. Kaizen has a great production, sound wise, and when vocalist David McManister starts screaming with his super heavy, hate filled voice all hell breaks loose. Blanket Hill switches instantly from fast-paced hardcore to more laid back palm-muted riffs and groove orientated drums. Single ‘Wrong Turn’ is a perfect example of just that. The track builds up with a slow intro that will have you moshing at the front of the stage, but the chorus changes the song a fast paced two step riff with David screaming “I’m surrounded by the blind, but do I see?” All the songs are very well written and there is never a dull or repetitive moment on Kaizen.

‘Truth Be Told’ is the odd song on this album, but I don’t mean this in a negative way. The song has an old-school feel and a lot of metal influences (kinda sounds like an old Machine Head song) without losing their specific hardcore sound too much. The break in the middle of the track is one of the heaviest on Kaizen and will have no problem getting a crowd moshing. The only thing I don’t like about this song is the electronic lead. It just doesn’t fit the vibe of the songs and distracts from the actual music. Next (and title) track ‘Kaizen’ is probably my favourite song on the EP. The fast paced and aggressive two-step intro reminds of Rude Awakening while the breakdown at the end turns the entire song around and sounds like it’s straight off of Downpresser’s Age of Ignorance. The solo at the end of the song gives it an old school feel and ties it all together.

The last two songs of the EP are nothing to ignore either. Once ‘D.L.T.’s first riff starts gaining pace you immediately start banging your head. David McManister spits the lyrics “They all say hell is other people, so solitude must be heaven” with so much fury it’s hard to resist singing along. Most of his vocals are well pronounced so it easy to understand and remember the lyrics. Closing track ‘Marking Time’ is a mid-tempo 80’s hardcore song that closes the EP with a heavy breakdown, just the way I like it.

Although Blanket Hill started just recently, their first EP Kaizen is written really well and will have no problem getting people to mosh and sing along at their shows. The band shows great promises for the future and is definitely a band you need to see live and support when they play near your hometown. Catch them the 21st of November in Luxembourg-city with World Eater and Surge of Fury and check out their record in the Bandcamp player below. Luxembourg hardcore lives!