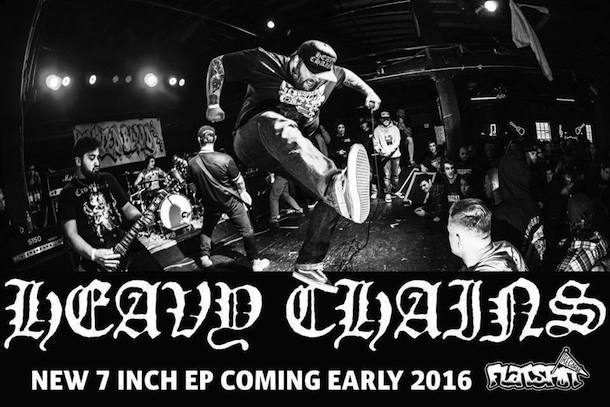 Heavy Chains have teamed up with Flatspot Records for their next release. The new breed from New Jersey aims to revive and continue the legacy of hardcore punk on the Jersey Shore.  The band will be recording their yet-to-be-titled debut EP this fall with an early 2016 release.

The quintet from the Jersey Shore formed in 2013 and released their very well-received Demo 7″ on Bad Rep Records. Shortly after, they released a split 7″ with another Jersey Shore power-house Blind Justice. With wide-spread reception and hard work, the band has been invited to play This Is Hardcore, Black N Blue Bowl, United Blood, among other staple festivals in the hardcore scene. With the release of their new EP on Flatspot Records in 2016 the chain gang plans to tour relentlessly all over the globe, to anyone who is about the hardcore punk movement.