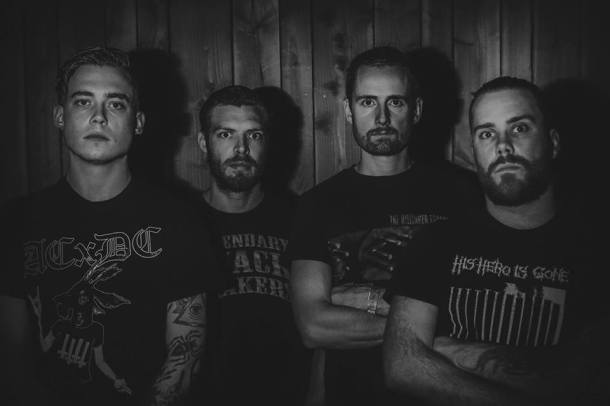 After getting an invite from vocalist Jonathan Edwards, I went to see Teethgrinder for the first time on a week day in Leiden, The Netherlands late 2014. With no expectations, just knowing I’d be in for a butt load of noise, I was absolutely blown away by their intense live show and heavy sound that reminded me of Nails and Hierophant. I confirmed them for L.A. Fest in Febuary and shortly after they announced their signing with Lifeforce Records and the release of their debut full-length. We set up the interview a while ago, but the guys have been insanely busy with the promotion of their new album and touring Europe. However, guitarist Mart Wijnholds took the time to answer the questions in detail, so enjoy the read!

“First of all thank you for taking the time to read this interview and having an interest in us! My name is Mart Wijnholds and I speak on behalf of Teethgrinder, a relatively new band from the Netherlands. Our band exists out of (ex)members from DrDoom, Korpse and Greyline and many other lesser known efforts. Teethgrinder’s sound is based on the energy and aggression of grindcore but includes a broad variety of other influences, from black to death metal and from sludge to the core. Within Teethgrinder, there are no boundaries, not in our style, message or variety. The extreme music serves as a carrier for our bleak message. We don’t believe everything will be fine, quite the contrary, the steady decay of this rotten modern day society fills us with anger and loathing. This hatred is something we need to release, through our music and live shows. We started playing live in February 2014, right around the release of our debut Hellbound, a four song 7″, which sold out after a few months. We played festivals like Into The Grave, Dokkem’ Open Air and Incubate, and played as many shows as we could. In the summer of 2014 we started recording our debut full length named Misanthropy, which will be released by Lifeforce Records on the 25th of May for Europe and the 2nd of June for North America. In order to promote our full length, we toured through Europe in April 2015 with Black Anvil and Tombs.”

How did you come up with the band name, Teethgrinder?

“One of the hardest things of being in a band is to figure out how to name it. In my previous grindcore assault DrDoom, we encountered a lot of problems with our band name. It was derived from a comic character, which resulted in copyright problems and implied to some that we were a doom band. The name Teethgrinder came kind of naturally to me, since I am quite experienced when it comes to the gnarling of the teeth. To me it resembles a state of stress and discontent, which fits the reason we are doing this band perfectly. It didn’t took long till we experienced the first barrier in findability, namely the song ‘Teethgrinder’ of the band Therapy?. Funny thing though; their bass player was actually one of the first people who bought our EP Hellbound in digital format!”

“Teethgrinder’s sound is mainly defined by the combination of our common frustrations and anger, sonic extremity and a broad range of musical influences and experience. If you are familiar with Legends Arising, you are probably into loud music and people have probably asked you, why you listen to such loud and angry music and why it needs to be so extreme. Teethgrinder exists in order to release our personal frustrations and anger, to express our views on this mad world and our personal struggles. There would be no need to do this without these feelings of discontent and disgust for our modern world. We feel our sound and music need to match our message and therefore be as extreme, loud, melancholic and angry, as possible. To achieve this sound wise, we use old amplifiers like Sunn’s and Sound City’s, hectic and aggressive drumbeats, over the top vocals and every shred of energy we have in our bodies. We share a deep passion for music and have been involved in music for most of our lives, playing all kinds of genres, from grindcore to bluegrass. That large range of influences reflects in the music we create and therefore makes it sound different than most grindcore bands.”

You’ve just signed to Lifeforce Records for the release of your debut LP, congrats! How did this come about?

“When the recording and the mixing was done, we made a press kit and made sure every label we we’re interested in had a copy of our record. Stefan of Lifeforce Records basically immediately wrote us back, since he liked it a lot. We talked everything over and came to an agreement of which we are proud and very thankful. It’s hard to find a label you can trust and that will work hard for you; Lifeforce is perfect for us and have already proven to be just what we needed! The signing of the contract happened at the amazing Legends Arising festival in Utrecht, make sure you attend the next one, great bands and a great atmosphere!”

Can you tell us a little bit more about the LP?

“We started recording Misanthropy in the summer of 2014, the music that’s on it was written throughout the time from when we started till May. We recorded most of it in our practice room in Zwolle, together with the wizard of tone Jb vd Wal. Some of the vocals we’re recorded at his studio called Hewwehetover in Groningen. The title represents all the different topics of our lyrics, for instance: death, loss, this decaying society, and pain. To us, misanthropy is about our disgust for the human race, how we are rapidly destroying the world around us, how everything is revolving around greed and power, and that we have lost sight of how to treat people like human beings. This world is an enslaving one where you need to get in line as soon as possible, work your ass off and never ask why. Humanity is a disease and the cause of all evil in this world. We need to express our frustrations about this to feel some sort of relief about being powerless over so many topics.”

What can we expect from the new LP sound-wise?

“The full length gives a broader view of the various influences within Teethgrinder. The sound is thick, dark but also defined! There are so many different songs on it but each of them resemble another aspect of heaviness. We are very proud of the result and can’t wait to share it with the world!”

You guys have been playing show relentlessly. Can we expect a big European tour any time soon? What else is to come in the near future?

“We have certainly played a lot of shows up till now. The focus was on the Netherlands and making sure we got well-known over here. However, the time to conquer the rest of Europe has come. We just finished our first European tour with Tombs and Black Anvil in April. Next to that tour we have been booked for Obscene Extreme, Grind The Nazi Scum and we will do a small tour through Europe with our buddies in Teething, with whom we will do a split release in the near future! Make sure you catch us when we visit your town. The album will be released at the end of May and we are already quite busy with writing new material! So expect to hear a lot more of us!”