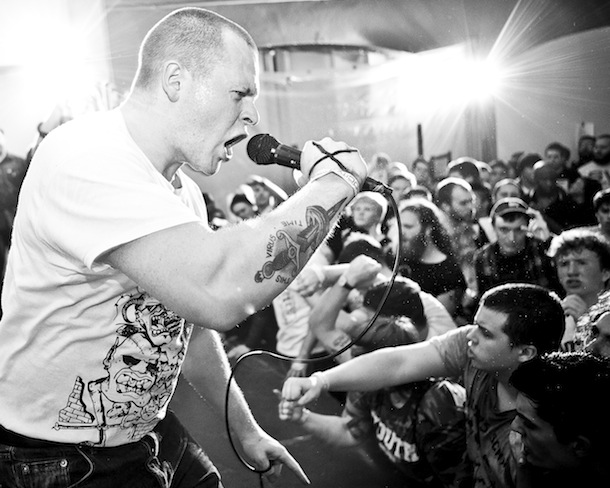 UK-based Violent Reaction are gearing up for the release of their sophomore LP Marching On which will be released on Tuesday via Revelation Records. The record currently is streaming over at BlowTheScene.com and the band has taken their Oi-influenced, straight edge, hardcore streetpunk to another level on Marching On. Singer Tim Pimlott took the time to introduce his band and talk briefly about the new album. Check it out!

How did you come up with the band name, Violent Reaction?

“It was actually a song name from a band I used to sing in called Nowhere Fast, probably the quickest I’ve ever named a band.”

“Straight. Edge. Hardcore. We do what it says on the tin.”

You’re releasing a new LP called “Marching On” later this month. How do you feel about this album compared to Violent Reaction’s previous releases?

“I think it’s a better representation of us as a band, cause this time I didn’t do all the writing, it was more of a group effort. Still sounds like us though I think.”

Violent Reaction is gaining popularity in a rapid rate. Where do you hope this new release gets you?

“I literally have zero ‘aspirations’ for VR, I don’t think we are owed anything and we don’t expect anything from anyone, we will just do what we do until we don’t want to anymore.”

Lastly, when will we see you guys in mainland Europe?

“Hopefully before the end of the year!”