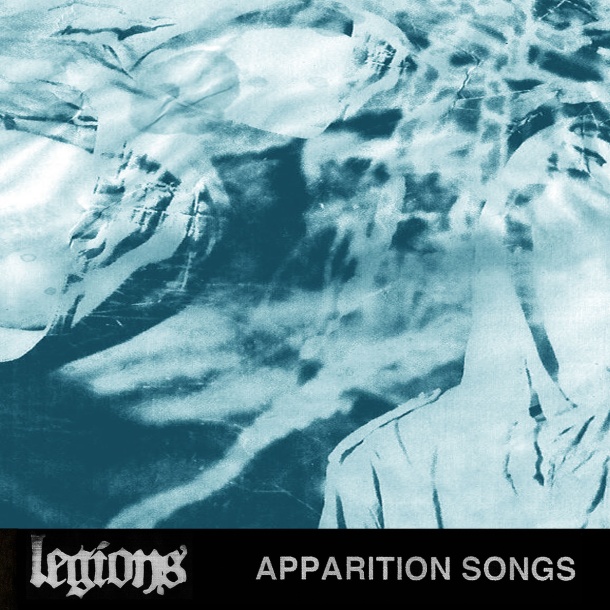 Legions are a metallic hardcore band from Sydney, Australia who have a new 7″ out via Broken Hive Records titled Apparition Songs. The EP was recorded and mixed by the bands’ own guitarist Elliot at his studio; this may explain why it sounds so tough! It only makes sense that someone behind the desk with such an insight into the songs could conjure up a result like this.

Drums are well-placed and cut through the mix with clarity without ever dominating. The guitars are massive..and of course they would be but the bass has some interesting moments and these lads seem to have a good hold on the idea of when to double guitars, hold a root note or simply not play for sections which in turn adds real ‘oomph’ when it comes back in. The vocals are dead centre and right up front making it easy to connect with what’s being said/screamed. There’s some occasional group/backing vocals but this is more or less straight up hardcore vocal work. At times the delivery reminds me of Turmoil and yet some of the slower riffs and breakdowns totally remind me of old Entombed riffs. It’s pretty cool like that!

You’ll clearly hear both elements of metal and hardcore across the four tracks on Apparition Songs and one song blends into another rather well. There were a few moments when I expected a typical chugga-chugga-dun-dun kind of breakdown to appear but the band never goes there. They reference a lot of older ideas from late nineties heavy bands and add a modern twist to them, it’s really enjoyable! The guitars play a huge part in this in the way they use harmonics/squeals and feedback, trill/hammer-on’s, triplets and even some slide-guitar. It’s a range of stuff that adds an extra level to the music and keeps it from ever sounding generic.

The band has released material before in demos and more recently a split with Brisbane’s Downside earlier in the year which is all up for download via Bandcamp and all worth sussing out. For a while they have been a band to watch and with the release of this new EP we hear a furious band with focussed songwriting, huge riffs and a unique sound that will catapult them right into the forefront of the scene and make good on all that promise people have been seeing in this band.