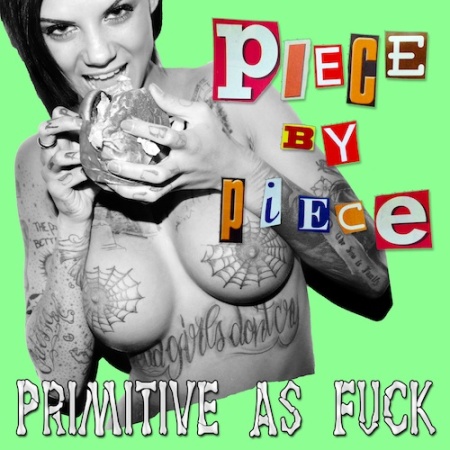 LA is no stranger to the hardcore scene, turning out some of the biggest names in the game; Strife, Terror and Black Flag to name a few. Piece by Piece have boldly stepped up with another vicious EP, and are ready to fortify their place amongst these hardcore veterans. Pulling in practiced members from a solid crew of bands – Terror, Carry On, and Internal Affairs, Piece by Piece’s latest offering delivers everything you would expect from a record called Primitive as Fuck.

With the majority of songs barely hitting the one minute mark this isn’t a progressive record, but what it lacks in complexity it makes up for in stripped back aggression. Opening track ‘You’re the Enemy’ is about as subtle as a kick in the teeth, and sets a ferocious tone for the rest of the EP. ‘I Fuck You’, ‘Put ‘em in a Line’ and ‘Fuck’ all showcase Piece by Piece’s straightforward, no bullshit style, without a glitch. Final track ‘Let’s Fuck’ goes to show Piece by Piece play what they want, when they want. A more punk sound is hinted at throughout the record, particularly on ‘I Just Wanna be Crazy’, but this track is a complete change from the rest of the EP, it almost sounds like a NOFX song. The only track to stretch beyond two minutes, it’s an inventive finale.

This record leans on the punk side of Hardcore more than the band’s self-titled release in 2010, but still manages to carve out their relentless, hostile sound. The vocals on Primitive as Fuck are harsh and the guitar is full of ruthless power chords, if you are a fan of bands like Take Offense and Bitter End you will probably enjoy it.

This record does exactly what it says on the tin. It boasts some of the most rapid, bone-crunching Hardcore you will hear, all crammed into ten minutes of pure brutality. If you have a spare fifteen minutes, sit down and listen to Primitive as Fuck, just make sure your mum isn’t in the same room.