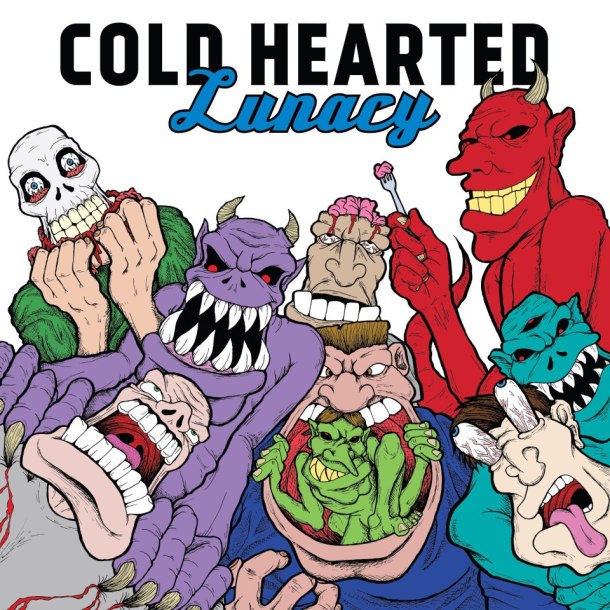 Cold Hearted is a Hardcore band from Florida playing tunes like they’re from New York. I first found out about them looking through Bandcamp pages endlessly. The first release they did was Illusions, often written as ILLUZNS. The sound of that record appealed to me, but I got even more into them because of the Slayer cover they did on Casa de Diversion Covers Vol. 2. The new release, Lunacy, is out on Life to Live Records; one of my favorite labels that released Losin’ It, Step Aside, Alert, and Outlast among others. Cold Hearted will fits right in with their new record Lunacy.

The EP starts of with ‘Potter’s Clay’ and it’s immediatly clear they’ve grown since ILLUZNS. The riffs are shredding and the vocals are very thrashy. In ¾ of the track it takes a harder turn and reminds me of Hardcore bands like Backtrack, Expire, Take Offense and The Mongoloids. ‘Lunacy (R.I.P.)’ starts off slow but picks up the pace quickly. You can really feel the crossover vibes in this song. It’s like Suicidal Tendencies went NYHC but with a modern twist. The double bass is insane in this song. The group shouts in this track give it more power than it already has and will do great on stage.

‘New Life’ is the third song and starts of mean. Uncompromising and in your face vibes you got to love in a Hardcore band. The solo in this track is killer and brings back that 80’s thrash vibe I am so in love with. ‘Path of Destruction’ is the shortest song on the EP. It’s hard hitting and the vocals start off within the first second, the amazing guitar riffs will shred the hell out of you. The point where the guitar goes to a more downtempo heavy riff is perfect. This song really destroys. One of my favorite tracks on this EP.

Last but surely not least is ‘Broken Man’; the opening riffs are sick. The thrashy vibes are kind of left behind on this song. It is as Hardcore as it will get. It’s pure aggressive energy that will make you move. The riffs are angry and the drums are just pounding on and on like a mean machine. The vocals are a little like the vocals seen on ‘Path of Destruction’; the lower mean pitch that will spit you in the face and grab you by the throat. It’s the Hardcore ending to a record that is quite the jam.

So in conclusion Cold Hearted knows what they’re doing and how to pull it off. The perfect mix between 80’s Thrash and NYHC. The only things that bothers me is the length and the quality of the recordings. In some songs the drums sound a bit off/weird but that is just a minor disturbance. Besides that it’s an ace record! If you’re into Hardcore, Hardcore Punk, Crossover or Thrash you should definitely check this band out! For fans of: Losin’ It, Step Aside, Provider, Malfunction, Brain Bust, Outlast, Suicidal Tendencies, D.R.I., Cro-Mags, Mongoloids, Wrong Answer, Evil Ways, Take Offense or any NYHC band in general.