While in Paradiso’s big room a sold out show by Dutch Hiphop group The Opposites was going on, visitors of the small, intimate upper hall experienced something truly amazing. A friday evening full of diverse sounds, including dreamy soundscapes, heavy breakdowns and fast-paced drum rolls. Title Fight was back in Amsterdam, and bought Whirr and Dead End Path with them.

California’s Whirr opened the night with their blend of Shoegaze and Dream Pop. Comparable to 90’s heroes like My Bloody Valentine and Lush, the band played a solid show drenched in feedback. Noisy guitars mixed with barely noticeable, soothing vocals (by a constantly shoegazing Kristina Esfandiari) and melodies.

It seems illogical to put a Shoegaze band on a tour like this. But knowing Whirr is signed to Graveface Records, and already played shows with Title Fight in the United States, things make a lot more sense. And if you compare songs like ‘Head In Ceiling Fan’ to the sound of Whirr, this choice isn’t even that strange. The short but steady show came to an end with the beautiful and heavy ‘Between Asleep And Awake’, which reeled in every visitor that still had their doubts.

And then, Dead End Path took the stage. A band that clearly understands the concept of beatdown. Mixing brutal, heavy, intense breakdowns with fast and groovy parts. While most of the crowd acted very tame, a big circle in the middle of the room was the territory of a couple of moshers that really enjoyed themselves.

Singer Uriah Thomas always brings his anti-hate lyrics with passion, and it was no different this time. Songs like ‘Never Have Heaven Ever’ (“about homophobia and sexism in the Hardcore scene”) made people go nuts, changing the atmosphere to something exciting and even a bit frightening. Set closer ‘Stay Up’ unleashed the first singalong part of the evening, something that the crowd really needed.

Title Fight released the solid Floral Green record last year, showing a somewhat more matured sound than their early material. Just like last years show with La Dispute, the band showcased the best material of their whole career. Set opener, the The Promise Ring-esque ‘Secret Society’, settled the tone for the whole show. The band played a diverse set with material of all their 3 records, managing to build bridges between the pop-punk oriented material of The Last Thing You Forget and the somewhat more ‘mature’ sound of the last two records. While a couple of stagedives, pile-ups and small pitts occurred, the Paradiso crowd of tonight seemed to enjoy listening to the music more than go crazy. Songs like the beautiful ‘Head In The Ceiling Fan’ and ‘No One Stays At The Top Forever’ got the most crowd support.

A real difference with past live shows by Title Fight happened with the combination of ‘Safe In Your Skin’ and ‘Lefty’. Two songs that make great use of dynamics and (live) feedback. They give you the feeling this is something different, more than a young band that wants to have fun, like Title Fight found a definitive sound they can grow in. The night ended with favourites ‘Shed’ and ’27’, giving a crowd reaction the band deserved. 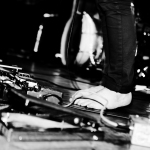 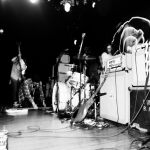 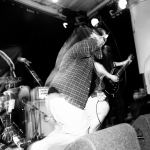 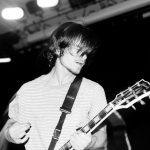 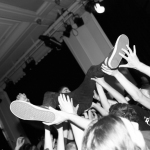