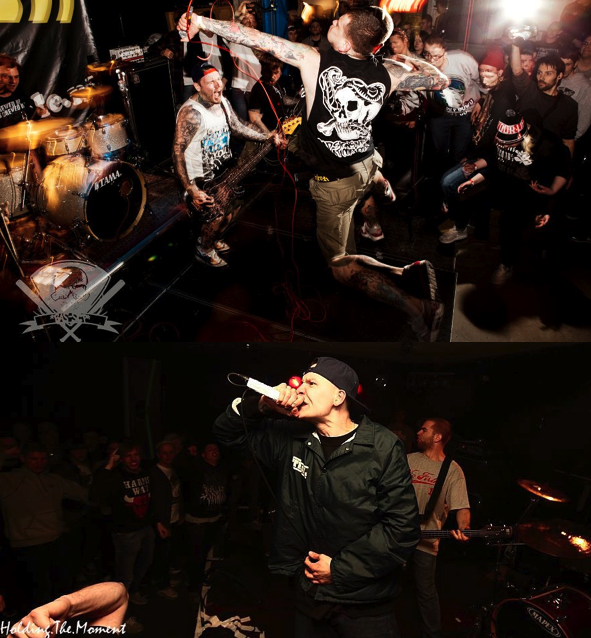 In anticipation of the True Spirit Tour Vol. 1, we’re eager to present the second double interview; an interactive conversation between two bands, discussing topics of their own and concerning the other band. Dresden, Germany’s Risk It! (RI) takes on Redemption Denied (RD) from Belgium/the Netherlands in this interview. Make sure to check out both bands on the True Spirit tour. Check all dates here.

Please introduce the other band…

RI: “Redemption Denied originates from the BE/NL Limburg area and easily brings the youngest guys on tour to the table. They released a self titled 7” on Save My Soul Records last spring and haven’t slowed down since.”

RD: “This is Kevin and Kasper (Redemption Denied) introducing Risk It! from Dresden, Germany. Risk It! started out in 2009 and deliver a fast and heavy NYHC-influenced mix of hardcore. They have been touring all over Europe during the last four years during which we’ve had the pleasure to share the stage with them on more than one occasion. They’re recording a new 7” in late 2013 as the follow-up to their 2012 full-length “Who’s Foolin Who?” (Farewell Rec). We look forward to being on the road together during the entire True Spirit tour.”

Who is the main musical influence of the other band?

RI: “They play straight up heavy hardcore. Heavy riffing with a classic hardcore crunch. Think of bands like Death Threat, 100 Demons, old Hatebreed and No Warning.”

RD: “Risk It! draws some influence from the NY sound, mixing it up with bands like No Warning and Strife as a self-reported influence. From time to time you’ll find them eagerly leaning towards stuff like Warzone or Outbreak.”

Name the main non-musical influence of the other band…

RI: “Hearing Kasper talk on stage you know they draw their anger from life’s daily struggles, from having to question society and having to decide what’s right and wrong for yourself. This and old Charles Bronson and Robert de Niro movies.”

What’s the juiciest rumor you’ve ever heard about No Turning Back?

RI: “There are rumours that the bassplayer is a German…”

RD: “Rumors have it that they are planning to do a show on the moon and have it broadcasted on YouTube.”

RI: “Every day you spend on the road and the time you share with friends, old and new ones.”

RD: “It doesn’t do it much justice to just pick one, but the best experiences always include friends: When were were heading out to Scandinavian soil last year, Bert (our driver) had only one goal: seeing a moose. We left without having the last day of the tour covered, eventually a friend offered to set us up in Oslo on two days notice. (Thank you, Iris!). By the last day, we had given up our hopes of running into anything remotely alive on the road and were supposed to spend the night in Stockholm. Our friends Pikey and Skinny Jay flew over for the show that night and with some help of our GPS we ended up having a crazy and memorable late night dinner with the local maffia at Stockholm’s own Malak Hanna (check YouTube). After that, we decided to just get as far away from Stockholm as possible and just went for the overnight drive to Oslo. Somewhere in the middle of the night we ended up on some back road just across the Norwegian border while the sun was coming up. Most of us were asleep in the back when Bert started yelling “MOOSE!”, hit the brakes and just stopped the van right there on the middle of the road, catapulting some of us on top of eachother. We never imagined it to be anywhere as huge as it was but Bert saw his moose and the magic of the moment was indescribable. We all got out and just looked at it while it slowly disappeared back into the woods.”

Can you describe some memories of your first show?

RI: “It was with Strength Approach in Dresden in June 2009, I sang together with Alexxx ‘Pushed Too Far’ from SOIA! Good times!”

RD: “Our first show was at the end of 2011 at the Stage in Arnhem (NL), at State Of Mind‘s “Knowledge Of Self” release show. Another band couldn’t make it and Emile put us on the bill. All I remember (Kasper) is being way too nervous. Filler played a Danzig cover and SOM killed it as always.”

What does an ideal show look like on the True Spirit Tour?

RI: “HC Kids going crazy, people enjoy the show and and having a good time together with all the bands.”

RD: “A crowd that’s as psyched as we are, low stages or a stage big enough to avoid getting hit by Joey’s bass, getting to see some familiar faces along with it.”

Why should kids come out to the True Spirit Tour?

RI: “To support European HC; the line up leaves no questions.”

RD: “No Turning Back is said to be playing some old songs. See you in the pit.”