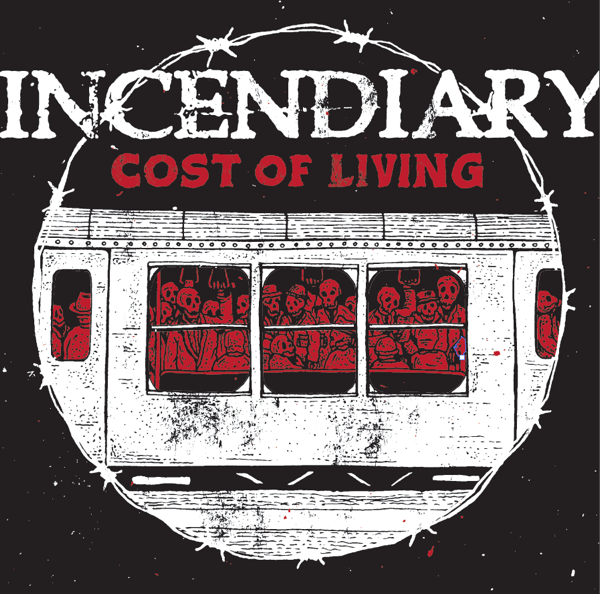 Incendiary is a band I first heard of because of Suburban Scum. I got the Suburban Scum split and I was surprised how good Incendiary was. After looking in to their other material like Crusade, the cover they did of the Beastie Boys, and last year the split with Xibalba, I became a fan. For those who don’t know, Incendiary is a NYHC band with no bullshit what so ever. They are inspired by old school bands and hit hard; they’re bringing metallic hardcore back. Forget about metalcore with the standard breakdowns in every song and chuggings riffs we have all heard a 1,000 times before that will (as always) be supplemented by some eery solo. This is the real deal, in-your-face hardcore with a metal edge that you forgot existed. If I wouldn’t know any better, I could’ve sworn they came from the 90’s. 2013 is a new chapter for Incendiary because they’ve released Cost of Living on Closed Casket Activities.

The release starts off very powerful with a slow but hard song ‘Zeitgeist’. The vocals grab you by the throat and the guitar riffs are hard and filthy. With only 2:30 of bursting noise they’ve set the mood for the entire record. ‘Primitive Rage’ is the second song, and fires at you like a machine gun. It’s not slow anymore, just hard, very hard… The title describes the song perfectly: it’s a song of rage and has primitive hardcore vibes seen in old Hatebreed, Integrity, and Earth Crisis. Third track ‘The Power Process’ is a song that holds some great 2-step opportunities, and will do great in the mosh. The guitar riffs are very catchy and I haven’t been able to get it out of my head so far. ‘Burnt Sacrifice’ is a spit in your face and a hammer to the stomach. The words are fired at you and the impact hits like a grenade. We’re already through half of the record with ‘Deed Before Creed’ which is the first track to be above three minutes. It’s a hard track with no compromises. It also introduces group vocals on the record. Group shouts are very common in hardcore and overused in my opinion, but it fits in this track.

‘Snake’ is a mid-tempo piece of mosh. The filthy bass riff in the beginning is just incredible and you can hear it very clearly through the entire track. You can also find a catchy riff throughout the song that will stick with you and makes the song a bit more outstanding. It ends powerful with the words “You’re spewing venom”. ‘Force of Neglect’ starts with a sample about police brutality so you’ll know what’s up! With powerful lines like “You serve nobody but yourself” and a lower pitch to supplement it this song is one of my favorites of the record.  The song ‘S.O.V.’ is just another Incendiary track; it’s not bad and it’s hard as always, but it’s not a very interesting song. The only part that is outstanding in this song is around 1:55-2:00 when you can clearly hear the lower pitched vocals again, this time as background vocals. ‘Erase Myself’ is another slow song that has a few surprises that you will find out when you listen to it. For me this is another outstanding track, that belongs earlier on the record. Last track ‘Silence is a Sentence’ is the ending that we can expect from Incendiary. The longest track on the record with its three and a half minutes run time. The passionate screams in the middle of the song are a definite plus. Lyrics like “I’m Sick of the Sorrow” get to you and will become some great shout alongs.

I think Incendiary will gain a lot of fans with this release and it’s a strong record. Although every song is good on its own, they all sound alike which makes it a bit boring. Incendiary isn’t a revolutionary band to begin with, they’re just rock solid, but they could use some more diversity. However, the second part of the record introduced some parts that keep you interested. ‘Force of Neglect’, ‘Erase Myself’ and ‘Primitive Rage’ are certainly excellent tracks. Incendiary fans like me will still love this, because like I said, it’s a strong record and has a surprise here and there to be found. If you’re not a fan you’ll probably have an harder time to get through this, but it’s still worth the listen! If you’re a fan of Strife, Snapcase, (old) Integrity, Inherit, Suburban Scum, Dead End Path, Soul Search, Expire or anything released on Closed Casket Activities, you’ll probably love this!