When Sheffield’s While She Sleeps announced their European run as main support of Asking Alexandria, quite some eyeballs rolled. “No Fit”, “Sell-outs”, etc. Core fans remember the first shows of the band in Europe, and the strong bond they formed with the band since. Having to see them in a 1,500 capacity venue didn’t fit in that picture.

However, While She Sleeps got on stage and gave it their all, like they ever do. The pit opened up various time, and here and there people were stagediving. Even though it’s not the atmosphere and setting most fans care for, the band played a solid shows and conquered some new hearts. Sleeps pleased core fans with golden oldies ‘Crows’ and ‘The North Stands For Nothing’, giving them a chance to show their mosh skills. The new album This Is The Six was represented excellently by playing ‘Until The Death’, ‘Dead Behind The Eyes’, ‘Our Courage, Our Cancer’, title track ‘This Is The Six’, and ‘Seven Hills’.

To give you some insight on the band’s growth, we asked guitarist Mat Welsh to comment on the reactions they for getting on this tour. “The reactions have been mixed,” he says. “We knew it would create a bit of a talking point as its not our usual scene. But for us it’s a chance to take our music to new people and new places. That is the most important thing, and I think people forget and pigeonhole too easily sometimes!”

The band has established a dedicated fan base since the first time they crossed the pond, and Mat explains: “We have been coming for a few years now, the shows and people are amazing, and we never want to pass up on the opportunity of coming. We have always played as much as possible over here. I think making extra effort to meet as many people as possible helps a lot, people over here treat music very personally so for us its cool to hang out with new people who like our band!” The change from 300 capacity venues to 1,500 to 5,000 influences the way the band builds on their relationships with their fans. “It certainly gets more difficult the bigger shows you play. As said before, I think making as much effort to get out and meet as many people as possible helps. Also, we hope that in our shows people feel very welcome and comfortable. It’s something anyone can join and be part of. It’s not untouchable or on a different level like some other bands perceive.” 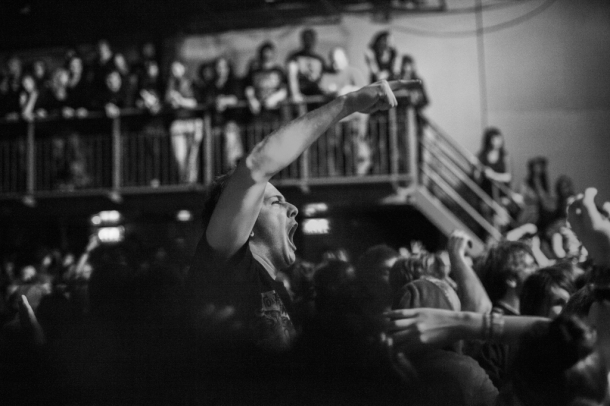 The band has grown immensely the past few years, and doesn’t plan on stopping just yet. Mat states: “Since we started this band the focus has always been to put 150% effort into everything you do. Play every show like its your last, whether its 10 people or 10,000. The last few years have been amazing and I have fulfilled many of my dreams faster than I expected too. I can only hope in the next few years we can continue to do what we love, play to more people & spread a positive message. If you work hard enough for what you want, you will get it.”

While She Sleeps have recently announced their debut appearance in the United States, supporting Parkway Drive in March and April.