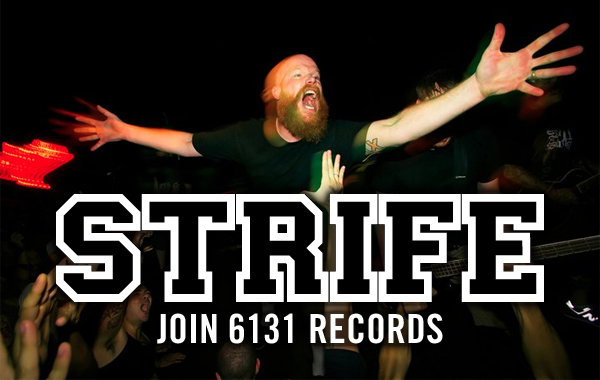 Strife and 6131 Records have teamed up to give you an insight in the recording process of their new record Witness A Rebirth.

This first video from the three part documentary series, “The Sao Paulo Sessions,” takes you down to Mix Nova Studios in Brazil and shows the recording process with drummer Iggor Cavalera (founding member of Sepultura and current member of Cavalera Conspiracy / Mixhell).  Directed and edited by Pablo Menna.

Strife traveled to Brazil to start the recording process with producer Nick Jett (Terror, Rotting Out, Backtrack) at the helm. Soon after, they returned to California and put the rest of the pieces into place, including guest vocals by Billy Graziadei (of Biohazard) and Scott Vogel (of Terror), plus a guitar solo by Marc Rizzo (of Soulfly). The result serves as a testament to their talent, bridging their past (especially the highly acclaimed album In This Defiance, with which this album shares 4/5 of the members) with a more contemporary hardcore sound.
Strife’s Witness A Rebirth is due out this Fall on 6131 Records.
Strife: Facebook / Merch