We’re beyond happy that Israeli hardcore band Kids Insane reached out to us earlier this month, with the request to promote their upcoming European tour. These guys play some legit tunes, and recently released their full length record All Over (read our review here). The band will play mainland Europe, and the United Kingdom this month, kicking off the tour at Fox and Newt in Leeds on September 20th. Besides a handful of shows in the UK, the band will also play in Germany, Belgium and the Czech Republic, so if you have a chance make sure to check them out and show your support! Bass guitarist Nadav and vocalist Corey took some time to answer our questions:

Can you introduce yourself and your band, and can you include a brief description of your music?

We are Kids Insane from Tel Aviv, Israel. We play hardcore punk, and the way we see it, it’s energetic, heavy and angry with loads of influences from British punk and American hardcore bands. There are four members: Corey on vocals, Nadav on bass, Assaf on guitar and Yoni on drums.

You just put out your record “All Over”; how have the reactions been so far?

We’ve all played in a handful of bands here in Tel Aviv, we all have put out albums, toured and played loads of local shows, and I think it is safe to say that the responses that we get for this album are far beyond what we’ve expected; both in Israel and worldwide. We had a record release show last month, and it really went well. All of our friends were there, but also other people that we never met before showed up with a lot of support. It is surprising for our small punk scene, where we usually know all the people that come to our shows by name. People order the album from all kinds of places through our Bandcamp profile and we’re getting a lot of good responses though e-mails and Facebook. Third Time Lucky Rekords approached us and were really keen on making this release happen. They are actually working on the second press of the album for our European tour at the moment. We’re looking forward to spread the word in mainland Europe and the UK this month. 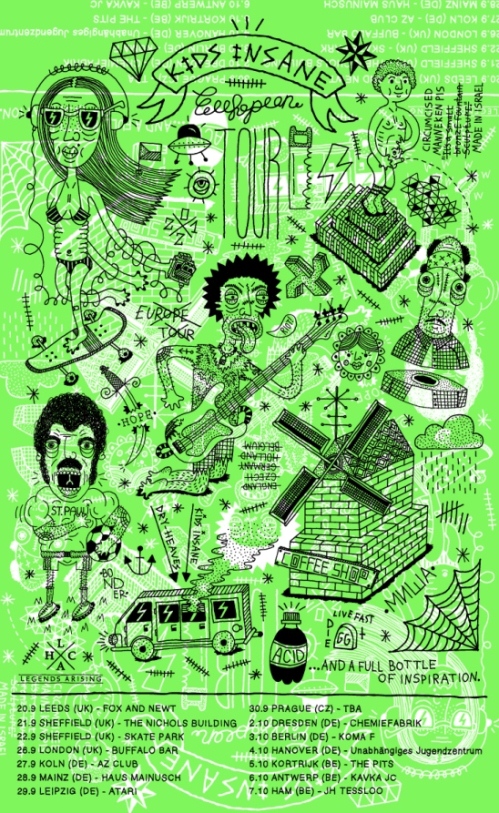 Looking at the video for ‘Same Shit, Different Scene’ I noticed a lot of logos, merchandise and records of (mostly American) Hardcore bands. How important are these bands for you guys?

Each one of these bands has a significant role in making us the band we are today As kids growing up we listened to Green Day, NOFX, and went to countless Useless ID shows; the fathers of Melodic Hardcore and punk rock in Israel. When we got a little bit older we spiced things up and got exposed to the american hardcore scene. The words of bands like Minor Threat and Gorilla Biscuits made a turning point in our lives. Almost a decade later Kids Insane was born while we were still listening to all these inspiring records.

The idea of doing an animated video came from Nadav and our good friend Alon Bonder. We are all big fans of South Park and that was definitely the main influence for the looks of the video. There are many references for the bands that influenced both Kids Insane and the people who made the video. The story of a bunch of terrorists stealing a load of music records from the bank opened up this cool way to have this homage for all these bands that we appreciate so much. I bet you noticed most of the famous bands there but if you’ll look close enough you will find out there a lot of Israeli band posters and records (Not On Tour, Bo Labar, Useless ID, DPA) as well as the famous american ones. We tried to put in as many references for the bands that influenced both the band and the video making process with Alon Bonder. All in all we had an amazing and fun time creating this video.

When looking at your Facebook page, one of your influences is ‘Israhell’, what is it that makes life for you in Israel so hard?

First off, life in Israel are not hard, and adding that “H” in “Israhell” is just an old Israeli metal joke that got stuck… Besides that, growing up here did shape some different point of views politics-wise and music-wise, which wouldn’t have been created elsewhere. Last but not least, we are atheists and we live in this “Zionist Jewish Democracy” (it’s a bit of an identity crisis we know). Growing up in a militant and terror struck society, we still ended up opposing to that “i’m the victim” point of view and most of us did not serve the army (which is compulsory here) – these things gets a lot of people to look down on you and differ themseves. Even though we are born here and have a freedom of choice, we live our lives feeling extracted from society, but in a way we’ve gotten used to the real Israel of today. The bright side is we can talk about all the bad decisions our government is making and try to oppose to the violent rule of law which is running in the occupied west bank. We think religion fanatics should be dealt with and there should be a separation of religion from the state. The israeli media is run by tyrants and politicians but we hear stories from both sides of the fence, and both of the sides say they want to live in peace but unfortunately are far from realizing what this peace means. So that feeling that everything can collide at any moment, and this country can go to war again at any moment is something we lived through and it just makes things slightly harder

What is the Tel Aviv Hardcore scene like? You seem to frequently play live with the band Not On Tour…

The Tel Aviv hardcore scene…. that’s a sensitive subject. The hardcore scene here is tiny, and it is coming and going with the years. There are a few really good bands going on right now (Not On Tour, Best, Bo Labar, Mondo Gecko, Firetrucks Rally), but is a very passive scene. Unfortunately the only people who put up shows usually play in the bands and all the promotion mostly goes on through Facebook, which is a shame. A lot of good hardcore bands don’t get exposed here because they’re comfortable with playing to the same 60 people every show. We believe in some of the old ways of hanging out posters and handing out flyers. You have to really work hard if you want to get some people here out of their houses to come party with you.

What kind of reaction do you expect from the European crowd?

We try to keep expectations low but we are always looking forward to meet new people and make new friends. It’s fun to meet good bands and catch some cool shows. We really can’t wait to have some good times together with our friends in DRY HEAVES, who are literally taking us on this tour. I think europe has much more room for the kind of music we play so it would definitely be more exciting for us than another local show. We hope you guys come by.