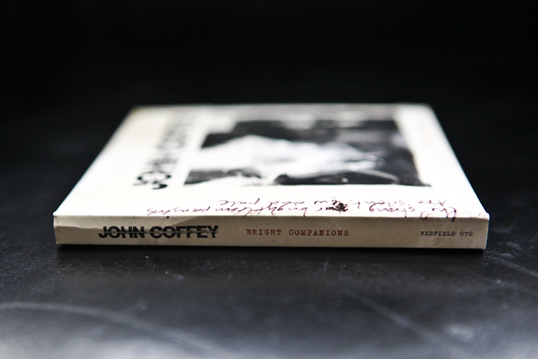 John Coffey‘s brand new full length record Bright Companions is far from an average hardcore disc. As a matter of fact, I’m not sure if you can call it hardcore at all. The quintet from Utrecht, The Netherlands produces dirty rock ‘n roll, with a southern twist and a touch of screamo. It’s clear that the band have their minds set on conquering ground with their Redfield Records debut.

2011 and 2012 were rowdy years for the band; after the changing of the guard, David Achter De Molen replaced Art van Triest on vocals. Christoffer van Teijlingen was also added to the line-up, to enforce for the band on guitar. These changes definitely left their marks, and brought some bigger balls to the table; the rock ‘n roll level remained the same, yet the amount testosterone that flows and the energy that breaths through the songs, increased tremendously.

In an early stage of the writing process the band reached out to their fans for financial support. With their minds and hearts focused on putting out the best heavy rock ‘n roll record in history, they called in help from producer Pelle Gunnerfeldt. This man is responsible for the production of Refused‘s legendary album Songs to Fan the Flames of Discontent. Through a successful Sellaband campaign the band enabled themselves to raise 4,000 Euros with the generous help from their friends, fans and family, and entered the studio in Sweden in October 2011.

The fruitful recording process with Pelle and co-producer Jag Jago (ex-guitarist The Ghost of a Thousand) led to an astonishing result. Bright Companions is heavy, energetic, and aggressive at moments. It reminds me of Maylene and the Sons of Disaster‘s southern twist, Refused’s energy and aggresion, and The Hives‘ poppy refrains. The record covers a wide spectrum of styles, and will please both metal-heads and hardcore kids.

The band decided wisely on picking tracks for the recently released videos. ‘Romans’ and ‘Featherless Redheads’ are both energy-packed songs that make me want to climb onto people’s shoulders and reach out to David’s microphone to scream along. Other tracks that support this feeling are ‘Oh, Oh, Calamity’ and ‘The Well’.

One thought on “Album of the Month: John Coffey – Bright Companions”