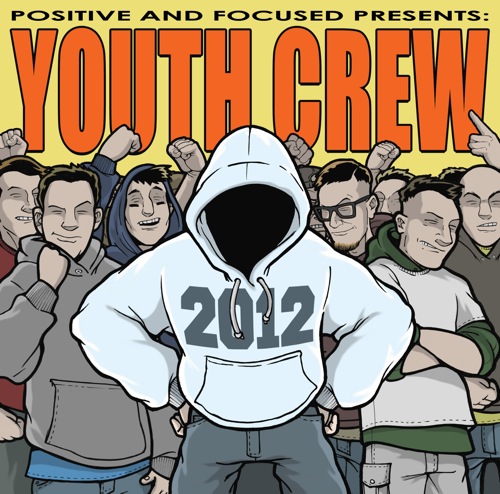 Positive and Focused Records presents its third compilation EP, featuring a wide range of straight edge bands from around the globe. Youth Crew 2012 includes tracks from Chain Reaction, Truth, Make A Change, Enough, Truth Inside, xCurraheex, Step Aside, You’re Next, and Flex. The record was released digitally through Bandcamp, and on 7″ vinyl. It comes with four different covers, and two colors of wax; black and orange.

There are a few tracks on the compilation that stand out, Enough’s ‘Stop The Hate’ being one of them. The Nashville, Tennessee crew steps away from the main topic on this 7″, by making a clear statement on racism: Pointing a finger – you’re such a disgrace / Putting your pride in your own race.

Truth Inside gets back to the Minor Threat era with their song ‘Abstain’: I choose to abstain only for myself / Not for you or anybody else. They go back to the roots of straight edge, living a straight life for themselves, not for anybody else. They’ve turned their back towards this world, walking their own line, not one that has been dictated by a group of kids.

‘Reaching Out’ is the title track of Step Aside’s latest Life To Live Records release. Fast paced beats are supported by clear bass melodies and guitar riffs. Step Aside writes about reaching out to drug abusive friends who refuse help. Killer track!

‘Start Again’ by You’re Next is probably the most inspiring track of all. The band comes from Tel Aviv/Haifa, Israel, and preaches about starting over. In a country that’s ruled by religion and wars, the band found a way to kick against the strict regime: I broke the circle / I smashed the chain / From what society guides you I walk away. The track comes off their 6-track EP Rise.

Youth Crew 2012 might not have reached its goal to include bands from every continent, but Toni P. from Positive and Focused did a great job at selecting bands for this year’s compilation. The 7″ comes in a great handmade package, and is definitely worth the 4 bucks.