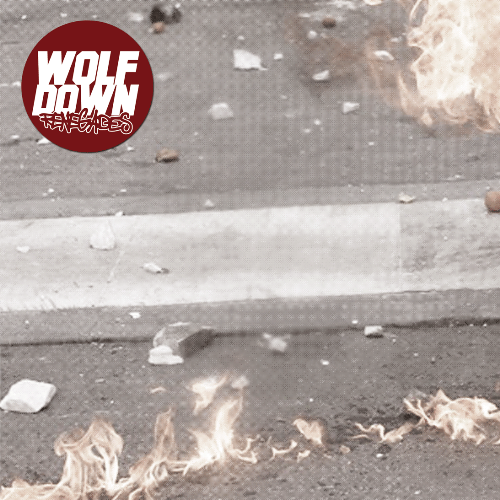 noun
a person who deserts and betrays an organization, country, or set of principles.
• a person who behaves in a rebelliously unconventional manner.
• archaic a person who abandons religion; an apostate.

Raised from the industrial grounds of Ruhrpott, Germany, WOLF x DOWN has come to make a statement. Their recently released four-track EP Renegades promotes anarchy, “the revolutionary idea that no one is more qualified than you are to decide what your life will be“, as the booklet preaches. WOLF x DOWN shreds apart all notions of a corrupt, overpowering governmental society.

The female-fronted quartet presents an aggressive style of hardcore, though staying true to the old school sound. Front woman Larissa possesses a low yet sharp voice, staying on top of things with her carefully chosen vocabulary. With Tommy being the only one providing guitar riffs, bassist Merlin has an important job on his hands: to keep things grooving, which he greatly succeeds in with the steady beats from drummer Sven.

Opening track ‘Baring Teeth’ builds up slowly, before the song transits into its first two-step verse. WOLF x DOWN immediately defines what they stand for, advocating their anarchistic views: “I got caught up in lies – false promises of a better life (…) I cut the strings of authority. No gods. No masters. I’d rather be free.”

It’s clear that WOLF x DOWN goes back to the early 80’s mentality of questioning everything that goes on in life, playing hardcore “how it’s supposed to be”. ‘Dead End Road’ feels like a release of aggression, kicking against other people’s footsteps in ignorance. ‘Stone Cold’ follows, showing the results of ignorant living, leading to faceless faces, and living lives without passion or honesty. WOLF x DOWN speaks truth, not holding back.

Title track ‘Renegades’ draws a thick line under the statement WOLF x DOWN makes with this release: don’t settle for anyone’s rules, ideologies or theories, without questioning them. That’s what hardcore in 2012 is, and should be about.