After traveling through Malaysia for almost one month, and visiting Singapore for four days I’m back in Holland. Yet again it was great to experience the rich culture of both countries, enjoy the food, and weather. This time I was able to get in touch with various bookers in Asia who helped me out in finding my way around the hardcore scene there. On June 11th I attended Thick As Blood‘s show in Kuala Lumpur. To give you an insight of the scene, and the show itself, I worked on a short write-up.

Among the Indian dancers, and sales men who try to sell you the latest Euro cup t-shirt or Louis Vuitton bag for “cheap price for you sir” (just imagine the Asian accent yourself), we found our way to Central Market on a hot and humid Saturday afternoon. With around 300 attendees on the Facebook event out of the 900 invited kids, and earlier positive responses from bands like No Turning Back and Backtrack who’ve toured Asia before, I had decent expectations of today’s show. Once we entered Central Market, which is basically a one story mall filled with smalls shops selling local products and souvenirs, it was easy to find our way to Annexe Gallery: follow the “scene kids”. 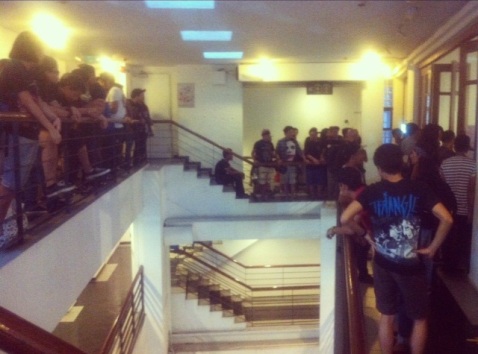 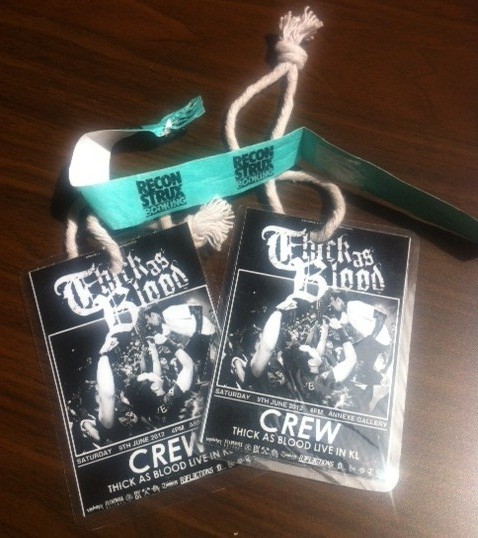 Besides the racial difference, their appearance doesn’t differ much from European kids; Vans shoes, gages, skinny jeans, shirts from Parkway Drive, More Than Life, Miles Away, Youth of Today, Agitator, Backtrack, Bane, you name it. Once arrived at the top floor of Central Market at Annexe Gallery, there was huge group of people waiting to enter the hall. The gallery is divided by two small halls (approx. 100m2 each); we entered in one hall where we got our wrist bands and where people were selling records, stickers, drinks and merch. Through a narrow doorway we reached the second hall that’s located parallel to the first one, where a small stage was set up. CastAway just kicked off their set, throwing in a cover of Terror’s ‘Always The Hard Way’. Deathscore followed, also playing quite a good set. Although the responses to the eight support acts differed, there was always a solid group of kids getting their game on and having a good time. It was great to see the positivity, and enthusiastic response from the crowd.

Even though merch is popular in Europe, kids in Asia seem to crave for it more. A massive line formed in front of the merch table, once the guys in Thick As Blood arrived and started sorting out all the t-shirts and jerseys. According to bassist Brandon Stastny, selling merch is the only way to make touring in Asia affordable. With low show fees, a ton of flights to book, and paying for overweight (Air Asia is cheap, but a bitch when it comes to overweight), merchandise is the key selling point for bands to pay their bills. Once Thick As Blood hit the stage, it became clear why their merch sold like  wildfire. Their strong performance got the whole venue moving around, kids were moshing and jumping on top of each other.

To get back to the popularity of merch in Asia, I also noticed that kids there really support local bands. I saw a ton of Thy Regiment (Kuala Lumpur, Malaysia based hardcore band) and Straight Answer (Jakarta, Indonesia based hardcore band) t-shirts, and a local kid told me that kids are very enthusiastic about music, pre-order records, buy merch and go crazy to any band they get to see. Tonight’s show was a great confirmation of that conversation. Financially and logistically, touring Asia might not seem the most attractive idea at first. However, if you’re well connected it’s definitely worth taking the risk. Asia offers small, but responsive crowds who’ll be after your merch, delicious and cheap food, great sights, a rich culture, and an unforgettable experience. If you’re considering touring Asia, I’d most certainly recommend to get in touch with Adi from Holding True Booking (Indonesia), Jai from Reconstrux Booking (Singapore), and Akhmar from BRNWRCK Booking (Malaysia) to get things rolling. GET TO IT!