During her short trip through Portugal, our photographer and writer Dasha Veselovskaya had time to sit down with the guys in Reality Slap. They played a great show on the Brothers In Arms tour with Devil In Me and More Than a Thousand, of which you can see some photos in this article. Enjoy the read!

How did you get onto this tour?

We’re very close friends with Devil in Me, so last year when we first talked about the idea of this tour they immediately said we would be on it. Then it was just a matter of choosing the dates.

Can you share two stories about co-headlining bands Devil In Me and More Than a Thousand?

Devil in Me are really good friends of mine, and actually I got to go on tour with them for a couple of times last year. A funny fact is that on their new video ‘The End’ I’m the only Portuguese guest on it and I recorded almost every guest appearance of the other bands on it, when me and Matos went to the US. As for More Than a Thousand, I can’t say much, they just celebrated 10 years of existence, but it’s our first time playing together unfortunately. I can say that they’re a very good band with nice people and just wish the best for them.

Since Tiago is also playing in Devil In Me, how often can Reality Slap actually go on tour? Would you say that his priority lies with one of the bands more than the other?

When Tiago joined Reality Slap he was already playing for Devil in Me, and we talked about the problem of having two bands. However, Reality Slap doesn’t play as much as Devil in Me, and as we are good friends we can always come up with a way that no band gets in the way of the other. One solution is that we have been playing a lot together, haha. So maybe we’ll go on tour outside portugal together, who knows.

Which places have you already visited? Any favorite venues/cities?

I’ve visited quite a lot of places in Europe, but when I was playing with Devil in Me. Reality Slap only played in Portugal and Spain. In Portugal, I have to say that Lisbon is my favorite but it’s my city, so I’m expected to say this. I think I can speak for the rest of the band that we had two very special shows in two different venues; the first was Reality Slap’s second ever show at Casa de Lafões which is a small venue in Lisbon where we had one of the craziest shows. The second one was at Santiago Alquimista where we played with Parkway Drive, but every show we play is special and we have been lucky so far.

Is it difficult to combine being in a band with ordinary life? What do you all do off the stage?

Sometimes it is. Hardcore doesn’t pay the bills, so having a band is and always will be a thing we do for fun and for the love about hardcore and music. We’re with five guys and everyone has his own problems and leads different lives, but we always need to find a time to practice, play shows and write. I live in London now so it’s been even more difficult to combine; I have to fly every time we have a show. I’m still studying, and so are Gus and Tim. JP and Tiago both work.

Your album Necks and Ropes sounds great! How long did it take to write that release? What inspired you?

Thanks, actually the writing process for Reality Slap is always very quick, we just “go with the flow” of the moment. Our first demo and CD was written in one afternoon by Gus and me. This new record took more time, also because we didn’t have as much free time to be together. However, it didn’t take long even though we thought more about the songs than on the previous CD. We were inspired basically by what we already have done. We wanted to sound the same but with a little new twist, maybe a little more metal, but our major influences since the beginning were bands like Agnostic Front, Breakdown, Dmize and the Cro-Mags.

Could you name five influential records that have defined your music taste through the years?

That’s a hard question, and I can only speak for myself because in the band everyone has his own tastes and preferences. It’s difficult because I don’t want to be unfair to other great records that I also love and have been very inspiring for me. It’s really difficult but there are immediately two bands that I have to mention that for me were very inspirational, one is X-Acto that was a portuguese band from the 90’s and the other is Madball.

Reality Slap’s last music video for ‘THE END’ came out about year ago. Have you thought about making a new one?

Yes, and we hope to shoot a new video soon. But has been complicated with me living away from the rest of the band. Let’s see what can be done. 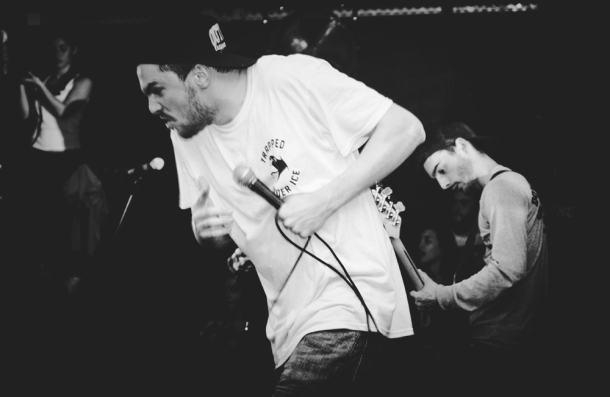 What lies in the future of Reality Slap?

For now we just released ‘Necks & Ropes’, so we want to promote it as we’ve been doing. We hope it spreads around well, so more people can get to know our band. There’s the possibility of it being released on vinyl soon. And for now just play some more shows and maybe at the end of the year we can play some shows outside Portugal, who knows.

One thought on “Interview: Reality Slap”