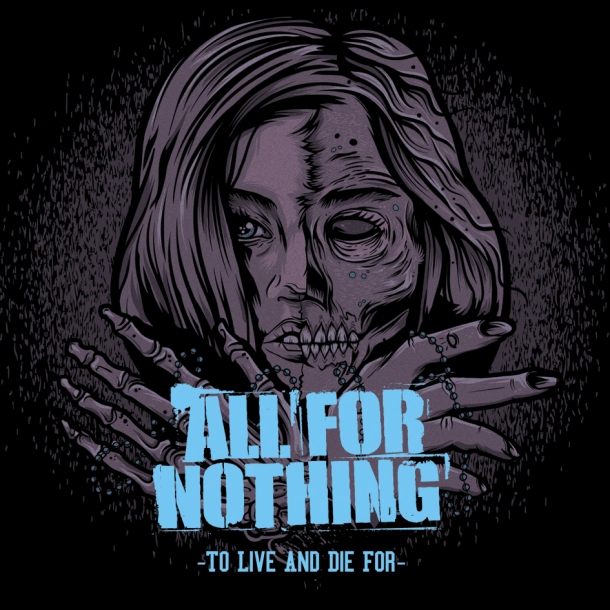 Five piece female-fronted hardcore band All For Nothing from Rotterdam (NL) have released their second full-length called To Live And Die For. The record is out via GSR Music, released on March the 23th 2012. We were at one of their release shows, and this is what we think of their latest release.

The album opens with the track ‘Dead To me’, the first of their double track music video. A very personal song, though in my opinion it is a bad choice for an opener. Why do I say this? It gives a bad impression of what is to come; a very, very well put together album from the guys and gal in All For Nothing.

Going through the songs my attention went out to how professional this record sounds. Besides the fact that this album is very well recorded and mixed, you can truly hear the progression of the band through the years. The tracks have heart and soul, they breathe. And that’s the cool thing, because no matter how professional the album sounds, it still has that raw All For Nothing hardcore edge to it.

Next track that really got my attention was ‘Idle Hands’. I found this track interesting because of the whole composition plus the little extra details that make this a very complex but cool song. The amazing opening with bass getting accompanied by guitars after a couple of rounds, the drums kick in, the tension builds and explodes into a crazy amount of energy that will get many of their feet.

‘Twisted Tongues’ is the fourth song of the album and, in my opinion, the stronger half of the double track music video. It’s put together very well, has an interesting and recognizable riff and extremely strong words. It’s a great song and you can bet that it will do very well during their shows.

Cool thing about the ‘Without A Doubt’ track on the record are the guest vocals by no one less than Craig Setari of Sick of it All, ex-Straight Ahead, Agnostic Front, Youth Of Today, etcetera, etcetera.

Personal favourite of this album has to be ‘Point Of View’. The track is hard and fast, has a cool transition leading up to a catchy riff and even more catchy lyrics. If done the right way this will be one great song for their live set!

No matter how good the album sounds, it doesn’t really bring much new stuff to the table. However, it’s good for a hell of a party on many stages nonetheless. That’s what I love about this band: humble, honest, straight to the point, and they’re just great people in general who make some great traditional hardcore music.

We really like the album because it is what it is, and it does what it needs to do. The band has grown, kept their sound, added a little extra twist and upped their personal game. I can hear great improvement on any of the parts in the band. It sounds like All For Nothing have found their spot in the scene and will keep going, touring, playing shows every weekend.

Keep an eye out for All For Nothing, come see a show; it’s more than worth it.