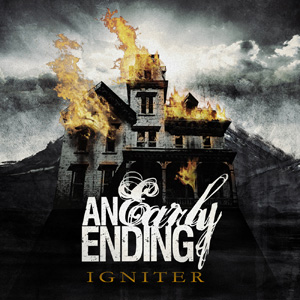 Harrisburg, PA’s An Early Ending have announced details regarding their upcoming album, a blistering metal romp entitled Igniter to drop September 6th as a split label release from CI Records (the label that helped launch August Burns Red and Texas In July, among others) and Decadent Suite Records.

The new album marks the band’s triumphant return after a near-fatal accident that sidelined the band for nearly a year surrounding the release of their 2009 debut, Bloodlines.

“The accident hurt us in many many ways besides just the physical damage,” recalls vocalist Alex Runk. “We lost our van, trailer, equipment and nearly our dreams. It’s shattering when you realize absolutely everything you have worked for is gone. I honestly didn’t know if we were ever going to play again.”

With the release of Igniter, the band members are poised to make good on the promise they’ve displayed in the past. The resulting album draws an influence from the metalcore bands that An Early Ending grew up on and have often shared the stage with, while pulling in elements of mainstream hard rock to create a sound that is pummeling yet chorus-driven. It’s a sonic assault that manages to avoid the scream-sing-scream formula often associated with the genre.

The band is currently streaming the track ‘Powerless Monster’ on their Facebook page.