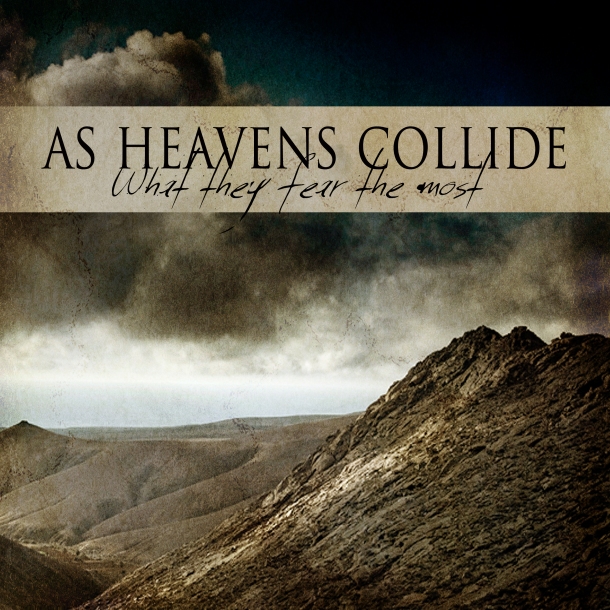 Since the formation of the band in 2008, As Heavens Collide have progressed and built their own sound. With their self-recorded debut EP Sail The Storm released in august 2010 they showed what’s up. Now this summer What They Fear The Most, the 7 track debut album will be released and a new face of the band shows.

With a wide variety of influences comes a variety of sounds all mixed together, which is done in a great way on this album. Most bands that combine musical styles and genres do this in different guitar riffs. That is were As Heavens Collide is not like most bands, there are multiple genres combined in a single riff. In this the bass and drums follow the guitars where needed, and play different parts where possible. Nothing sounds out of place and everything blends together nicely.

The album starts with ‘Your Saviour’ which sets the standard for the album: fast melodic riffs alternated with technical rhythmic riffs. The transitions between parts contain complex drum fills or some unexpected chords. The guitar solos are pleasant for the ear but not to simple. At the end, where you think the song ends, there is another surprise when an acoustic guitar sounds, followed by an intense end.

The vocals on What They Fear The Most are strong but not overdone. All the songs describe fears one faces in life, which are told through both metaphors and straight forward lines. The guitar solos and vocals do cross paths sometimes though not in an unpleasant way.

After three songs there is an interlude called ‘Hopes & Dreams’ which with its name adds to the overall vibe of the album and gives a short break in the middle of fast guitars and banging drums. After one minute of dreamy guitar harmonics a split second drums intro sounds and the dream is ended with a bang when the title song ‘What They Fear The Most’ starts. In this song the singer is accompanied by Robbert from Wasted Bullet and Gideon from As Enemies Arise. The massive vocals are well supported by the rest of the band. To finish it all there is a beautiful solo at the end.

‘Through The Tides’ is the most diverse song of the album in the way of sounds and effects. At the start there is an acoustic riff, in the middle there is a part with ringing notes and the bands bass player lets us hear his clean voice.

Like every metalcore album nowadays, this album contains some gang vocals. The big difference with most albums is that the gang vocals are not overdone and not in the obvious places.

The only downside about What They Fear The Most is that you can’t hear every little note in one listen, but that’s how good albums are. ‘Your Saviour’ and ‘Remember’ are now available for free at http://www.asheavenscollide.com.